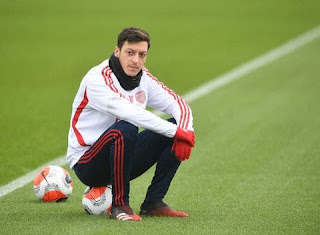 Mesut Ozil has confirmed he intends to remain at Arsenal until his contract expires next year.


World Cup winner Ozil was reported to be considering an exit from Emirates Stadium after failing to make an appearance for the Gunners following lockdown.

Arsenal last week announced plans to make 55 staff redundant because of the coronavirus pandemic and are reported to be keen to get Ozil’s salary – claimed to be £350,000 per week – off the wage bill.

However, the 31-year-old playmaker insists he will remain at the club and give his all during the coming season.


“My position is clear. I’m here through to the last day of our agreement and I’ll give everything I have for this club,” Ozil told The Athletic.

“Situations like these will never break me, they only make me stronger. I showed in the past that I can come back into the team and I will show it again.”


Regarding reports Arsenal were contemplating buying Ozil out of the last year of his contract, he said: “I’ll decide when I go, not other people. I didn’t sign for two or three years, I signed for four and that should be respected by everyone.”