Covid_19:Atiku's son reveals his experience from the hospital after confirmed positive

Mohammed Abubakar the son of former vice president, Atiku Abubakar, on Thursday said spreading fake news and unconfirmed information about those suffering from covid19 is capable of “compounding their problems”.

Mr Abubakar spoke in a video he made at the Abuja University Teaching Hospital where he is being treated since he was diagnosed with the virus almost two weeks ago.

He is the first confirmed infected person in the Federal Capital Territory (FCT) where confirmed cases have now risen to 35. Nigeria so far has a total of 174 infected people.

It was alleged that the patient had refused to oblige with the worldwide advisory of self-quarantine after returning from a European country.

It was also alleged that Mr Abubakar had visited a night club in Abuja and attended Juma’at prayers on Friday before he was announced as a confirmed case.

The former vice president had dispelled such claims as ‘perfidious information’. His media aide, Paul Ibe, had said the patient wore a face mask as a precautionary measure since his arrival in Nigeria and that “he voluntarily placed a call to (NCDC), seeking to be tested”.

Atiku Abubakar on Thursday shared a video on his Twitter handle showing his son wearing a face mask.

Mr Abubakar said he was still at the Abuja isolation centre in Gwagwalada. 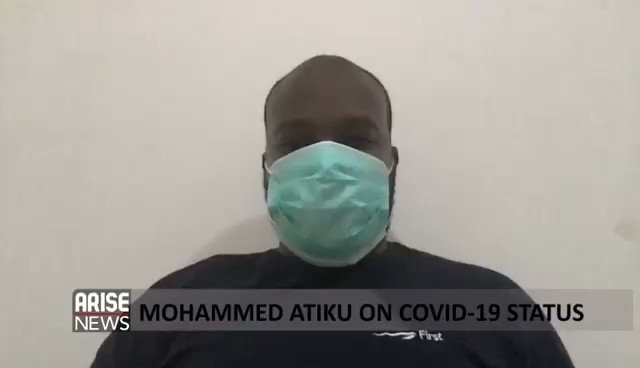 In the five minutes 39 seconds video, he advised Nigerians against spreading false information about sufferers of Covid-19. He also shared his experience so far in the battle against the dreaded virus.
Excerpts:

“On the 20th of March, I tested positive covid19 and later that night I was brought to the isolation centre at the Abuja University Teaching Hospital in Gwagwalada. I’ve been here for about twelve days and I hope to be out soon. I decided to make this video so I can talk about my experience and I hope it will be of value to people out there, Nigerians in particular.

In the first few days when I came here, I was asymptomatic but I was nervous. I had a high level of anxiety and a little bit of trauma, it was a fairly difficult few days especially being the index case in Abuja. I think that was the main challenge.


But day by day, I grew stronger thanks to prayers and support I got from a vast array of Nigerians, many people I don’t even know but of course my family and friends, associate have been supporting.


But one thing I will like to speak to Nigerians on my experience is about fake news. Fake news is very bad. It compounds your problems if you are in a vulnerable situation. Perhaps coming from a politically exposed family, I didn’t really feel that pain as much but for people who are more vulnerable. It could really affect their health and their immune system as well. So let me urge people out there to be very circumspect with how they treat information. Let them be careful about spreading information that is false. These things aggravate health conditions.

In my case, even people living within the estate that I live in were purveyors of fake news and it is quite unfortunate. I’m not really here to talk about those specifics but I will like to urge all of us to come together and see how we can support one another.

This is a challenge to our future and the present. The quicker we come together, the sooner we overcome this. The longer it takes to do that, the longer the impact in terms of fatalities and the economic impact. Thankfully based on the statistics, a lot of people will be fine from this but we cannot ignore the few that will not be fine so let us come together and support the government, follow safety regulations from WHO, federal and state governments.

Moving on, I will like to ask that we pray and show support to our medical staff because they are at the front lines. They are risking their lives. I’ve seen it first-hand how close they come to patients suffering from the disease. We need to pray that none of them gets infected and nothing befalls them and their families.

I also like us to show support to the authorities who are also doing their best to make sure that we conquer this disease. Let’s put aside politics and defeat this pandemic.”
Atiku Coronavirus News