Nigeria Achievers Award 2019: The Many Achievements of Gov. Darius Ishaku that Stood Him Out. 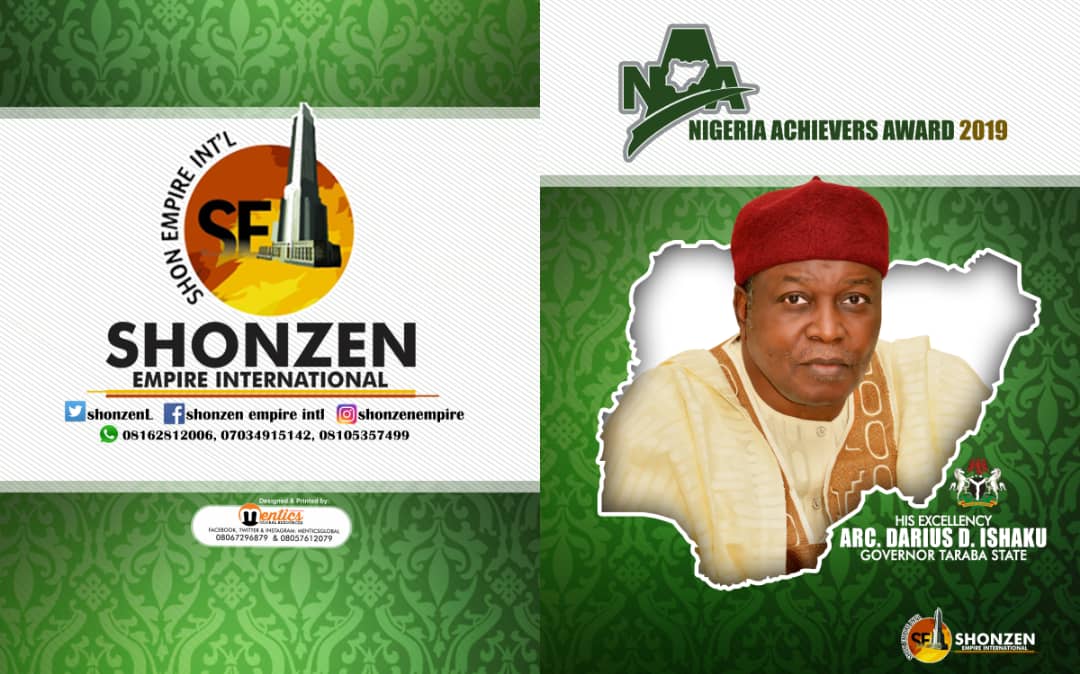 Governor Darius Ishaku is without much argument one of the best performing Governors in Nigeria  who within his first year in office, despite being distracted for eight months by court litigations from his defeated opponents has turned Taraba into not just a Modern State but an investment Hub.
These strides are strong reasons why he has been listed as a recipient of this prestigious award.
Below are some of the numerous projects that have made the Governor stand out in Nigeria.
Water Projects: 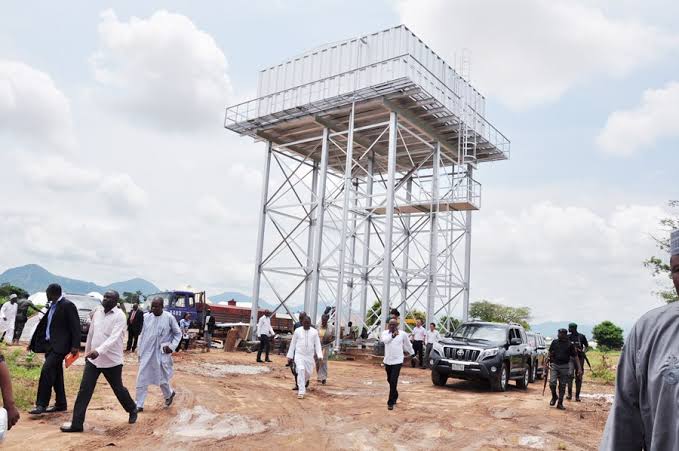 He declared state of emergency on Water Sector in the state following the unending Taraba Water Supply Agencyscarcity of potable water in Jalingo and its environs.
The governor ordered for the immediate overhauling of the entire water plants in the state. The Governor approved the sum of N8.5 million for the overhauling and repairs of water plants to ensure potable water supply in state.
The release of the funds was also for the immediate repairs of “all the boreholes” that service the state through water pipe networks.
100 hand pump boreholes were drilled in various communities all over the state to give people potable drinking water.
Procurement of 500 water pumps for irrigation and dry season farming  30 of the 40 towns in Taraba now has drinkable water.
1500 Cubic Meter elevated reservoir was erected.
Several Constructions:
Several construction projects has been taking place in the state. , PW Construction company and Taraba Road Construction and Management Agency, TARCMA, have been a usual sight in the state. Some of the finished and ongoing projects include:
Jalingo:  Road constructions in Palace road(4km), Magami road, where he opened the road in Magami and constructed new ones, opened and constructed Palace way road. Road from DSS to specialist Hospital, providing of drainage systems in several places to reduce erosion.
Jalingo – Kona – Lau road.
Takum:  6.5 kilometre Takum, Katsina Ala road, the Abuja 2.2 kilometre.
Takum-Donga Gawa Road(15Km).
Bali-Gembu-Serti road: Paid PW Company N300 million to complete the road.
Mararaban-Abong road: Contract has been awarded to assess and design the road.
Jalingo -Kona Road Bridge.
Increased Power Generation
It is widely believed that it is a taboo to have months of constant transformer7electricity supply in Taraba  State.
Before he assumed office, the past administration was indebted to the Yola Electricity Distribution Company, YEDC, to the sum of N74 million, the company had then disconnected Government House, Jalingo and other government structures in the state.
Governor Ishaku on assumption of office paid half of what the state government was indebted to the Yola Electricity Distribution Company (YEDC), which has greatly improved power supply. He has also increased power generation by taking care of the following:
Construction of 1 x75 MVA, 33/11KV Injection Substation Complete with Standard Control Room and Radiation of 11KV Feeder.
Official Commissioning of an Ultra Modern Cut Tear and Curl (CTC)Machine. The Tunga Dam to give twenty-four hours power supply.
The Commissioning of so many rural electrification projects.
Solar Powered Street Lights:
To illuminate the streets at night against criminals, solar powered jalingostreetlightstreet lights has been installed along NTA-Danbaba and Donga roads in Jalingo town. Other areas are still under development.
Influenced Massive Power Projects:
Governor Darius Ishaku, who served under former President Goodluck Ebele Jonathan’s administration as minister of state for power was able to influence the Kashimbilla Dam and the Mambilla Hydro Power projects, among  others, to the state.
Improved Internally Generated Revenue
: He is diversifying internally generated revenue by engaging all his cabinet members including Special Advisers and Special Assistants. The Rescue Watch team is tasked with monitoring and improving revenue generation as well as to serve as his eyes and ears to keep him informed of the plight of Tarabans at the grassroot level. We have the revival of the highland tea, Viva feed mills and several others.
Security:
His Excellency received a donation of 10 Hilux Vehicles from Zenith Bank PLC to Taraba State  Gov. Ishaku also took proactive measures in security by reconciling the Kutebs, Jukuns, and Tivs by talking to both Religious and Traditional Rulers.
This has been a major milestone achievement as the State was under complete collapse of law and order.
Chiefs who sold lands belonging to IDPs were disciplined, and the lands of IDPs in the affected areas were returned to them. Many IDPs have returned to their farmlands and the government is working hard to help them recover all they lost.
Functional Airport:
He promised a functional airport for the people and on  the 7th of December last Jalingo airportyear, the Jalingo airport commenced commercial operations with the hope that before the end of the year it will be a daily flight. Up till this moment, most Nigerians don’t know Taraba now has a functional airport…but the overland airways now fly three times a week.
Health:
College of Nursing and Midwifery has since started operation as the current administration has seen that the project is completed. The Jalingo Specialist Radiological Laboratory Equipment has been repaired and revived. The governor undertook the renovation of the Takum General Hospital and stocked up the pharmacy which was only carrying out skeletal services.
Poverty Alleviation:
His Excellency disbursed N700 Million to Small and Medium Scale BOI4Entrepreneurs through Bank of Industry to assist the less privileged, who are now able to fend for themselves.
Employment:
It would be recalled that the state government recently conducted recruitment exercise to update the Nursing and Midwifery departments of state government hospitals, who had before now, been understaffed.
Job Opportunities:
His Excellency has revived the Taraba Highland Tea Commission. He removed all the 1970s obsolete machines and replaced them with brand new machines which are operating optimally.
People living in Kakara tea village now have automatic employment in various ways. Viva feeds Mills in Zing local government area, which started 27 years ago, was completed and commissioned by Gov. Ishaku, to create jobs for youth and help people who wish to go into poultry farming become self-employed.
Information
The achievements of Gov. Darius Ishaku’s Administration in this sector cannot be over emphasized. Some notable projects are listed below;

Digitalization of Taraba Television (TTV).
Construction of New Studios at TTV permanent site.
Fencing of T.S.B.S.
Purchase of 300kva generating set for T.S.B.S. Provision of Internet Services at Jalingo Airport.
Rebuilding of the taraba state government website www.tarabastate.gov.ng
Improved Agriculture:
The governor has also flagged off the Greenhouse project situated in Ardo Kola Local Government Area. In an effort to boost agriculture in Taraba state through dry season farming, Governor Darius has distributed dry season water pumps to beneficiaries from all local government areas through a multi purpose cooperative.
Twenty Four farmers drawn from Eight Local Government Areas of Taraba State have also received special training on the production of Sesame seed as part of efforts to boost the Agricultural Sector.
Environmental Sanitation:
Heavy duty trucks, vehicles and all kinds of cleaning equipment have environment6been purchased for environmental sanitation purposes. Monthly sanitation to keep Taraba clean has also started in earnest. Most of the piles of rubbish that used to be common sight in Jalingo, the state capital, has been cleared.
Tackling Ghost Workers:
In Taraba, we used to know that several ghost workers exist. Millions of naira have been wasted through it. For example, the Taraba state Universal Basic Education Board SUBEB, discovered fifty-two million naira (N52m) being paid to ghost primary school teachers, most of which were existing in ghost, non-existent schools.
In a sample of 1,560 civil servants, 520 were ghost workers, including 10 who were dead. Millions have been saved by purging the civil service system of this menace.
Urban development and beautification:
Gates at the entrance to the state capital, and all the Urban-development2roundabouts in the state capital have been renovated and the structures within them beautified. Illegal motor parks and shops were also demolished. Even a blind man will know that the state capital is wearing a new look.
Negotiating With Foreign Investors:
In his efforts to woo investors to the state, Governor Darius Dickson Ishaku visited Irish Ambassador in Abuja, made trips abroad and met with several stakeholders to woo investors to the state.
Youth Empowerment
Youth empowerment through skills acquisition in various skills like Tailoring, welding, catering, cosmetics etc.
Hope Afresh Foundation Taraba:
Through her Excellency’s pet project, Hope Afresh Foundation skillTaraba, thousands of lives at the grassroots level have been touched. Projects like medical rescue where thousands were given free medical care, helping internally displaced persons with relief materials, providing the less privileged with various skills and supporting local vigilante with adequate training, allowances and support have all been achieved.
These are just a few achievements of this administration within one year. You will agree that governor Ishaku should be given an award as one of the best performing governors in Nigeria, as he has achieved a lot within a really short time. The people of the state can all attest to his achievements because the projects are not hidden.
With all these and many more to come Gov. Darius Ishaku has been able to maintain a good governance framework for all other Governors to follow.
featured Taraba