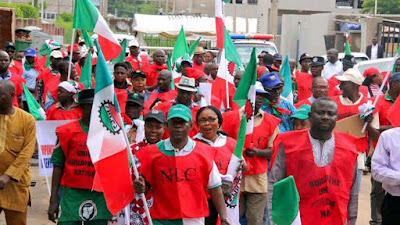 The Federal Government and the organized labour have reached an agreement over the consequential adjustment of the new minimum wage. The minister of Labour and Employment (State), Festus Keyamo disclosed this on his twitter handle Thursday night.

Keyamo, who tweeted during the negotiation between the FG and Labour said: “After some delicate negotiations (with both Ministers as conciliators), the government and Labour have finally reached an agreement on the consequential adjustment of other wages following the implementation of the enhanced minimum wage of 30, 000.


“we are working on the communique,” he said.

The Federal Government and organised labour on Thursday finally agreed on the percentage increase on the consequential adjustment in workers ’ salaries as a result of the new minimum wage of N 30 ,000 .

As the meeting reached an advanced stage , the Minister of State for Labour and Employment, Festus Keyamo , tweeted from the venue that both parties had reached an agreement, but he did not give details .

The tweet read, “ After some delicate negotiations ( with both ministers as conciliators ) , the government and labour have finally reached an agreement on the consequential adjustment of other wages following the implementation of the enhanced minimum wage of N 30,000 . We are working on the communiqué . ”

In a statement , the President of the Trade Union Congress, Quadri , and the Secretary General, Musa- Lawal Ozigi , confirmed the peace pact , commending the Federal Government and labour for their patience while the National Minimum Wage negotiations lasted .

The statement read, “ We commend the Head of Service of the Federation , Dr Folashade
Yemi -Esan , and her team for their sincerity .

Though they argued that the government could not afford to meet our earlier demand of N 30 ,000 minimum wage across board because of the economic situation in the country , we made them understand that some people could not be more Nigerian than others . If we are tightening our belts , government should also do so.”

The secretary of the JNCSNC , Alade Lawal , also confirmed the figure to our correspondent through a text message after confirmation on what was agreed with the FG was sought from him.

Lawal had earlier told our correspondent that the parties had reached an agreement on the wage crisis.

The agreement did not come easy as negotiations between both parties collapsed several times in the last six months .

After the necessary legislative processes at the National Assembly , Buhari signed the 2019 New National Minimum Wage Bill into law on April 18 , 2019 .

Thursday ’s meeting was slated to begin at 7pm but more than one hour after the labour team , led by the President of the Nigeria Labour Congress, Ayuba Wabba , and the government team had taken their seat , the Minister of Labour and Employment , Dr Chris Ngige, and Keyamo came into the conference room.

On the government side were the Head of the Civil Service of the Federation , Folashade Yemi-Esan ; acting Chairman of the National Salaries, Income and Wages Commission , Ekpo Nta ; and the Permanent Secretary in the labour ministry , William Alo .

Ngige reminded the gathering that the future of the country must be given consideration in the negotiations .

He said if the country became broke because of personnel cost , it would suffer the consequences .