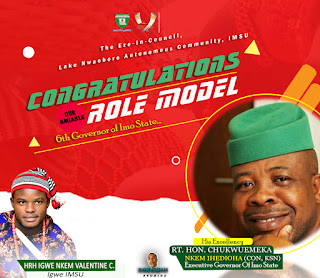 The Eze in council, Undergraduate forum Imo state university has congratulated Rt. Hon Emeka Ihedioha, on his election and inauguration as the 6th Governor of Imo state at the just concluded gubernatorial elections in the state.

The forum in a press statement signed by it's traditional ruler, Igwe Nkem Valentine, said “the election exemplifies the confidence of the people of Imo in his leadership.”

Apart from congratulating Hon. Emeka on his victory, the Eze-in-council also congratulated “the people of the state for their conduct during the election.”
imo state IMSU