There is palpable tension at the University of
Lagos (UNILAG), Akoka, on Monday morning,
as 15 hefty men in black attire stormed the
university campus and positioned themselves
around the Governing Council Chamber, venue
of the scheduled special council meeting.
This is as the university’s chapter of the
Academic Staff Union of Universities (ASUU)
has kicked against the development, describing
it as an attempt to militarise the institution by
“an individual.”
The registrar of the university, Mr. Oladejo

Azeez, a lawyer, had on Thursday evening
issued a notice of emergency meeting scheduled
to hold on Monday and Tuesday to council
members.
The notice, which was later changed to ‘special
meeting,’ was according the registrar at the
instance of the council chairman, Mr. Wale
Babalakin. He listed issues to be discussed at
the meeting to including the raging Mr. Saminu
Dagari-led committee’s report on expenditure
of the university between May, 2017 and
September 2018.
Other items on the agenda include the report of
panel set up to investigate the circumstances
surrounding the collapse of the institution’s
library, which was under construction, Mr.
Babalakin’s action of issuing queries to the
allegedly indicted university management
members including the vice-chancellor,
Oluwatoyin Ogundipe.
But as early as 8a.m ahead of the meeting
scheduled to hold by 10a.m, strange faces
numbering 15, who wore black attire had taken
strategic positions between the council chamber
and the university’s auditorium.
According to the university’s chief security
officer, Mr. Sunday Alao, the ‘strange men’
had told him they were invited by the chairman
of the university’s governing council- Mr.
Babalakin, to provide private security.”
Alao said; “Their leader, who said his name is
Lateef told me they are men of K-Square, a
private security company, and that they were
invited by Mr. Babalakin to provide private
security on the campus.
“I simply told them that they would be held
responsible if anything untoward happens to
any of our students, staff and any other
person in the university community.”
The chairman of ASUU on the campus, Dele
Ashiru described the development as absurd,
strange and draconian.
“This is most unacceptable. The pro-chancellor
cannot invade our campus with this kind of
military mentality,” Ashiru said.
Efforts to reach the university’s vice-chancellor
were unsuccessful as calls to his number were
not picked as at the time of filing this report. 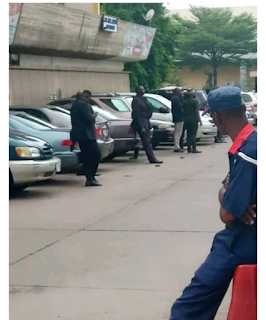