The Eze-in-Council Imo State University has summoned an emergency meeting with all the students union aspirants and departmental presidents which is expected to come up on Friday, May 10th, at the STAR HOUSE by 3pm according to the flyer sent online.

This new development could be in relative to the recent unraveling clouding up the political region ahead of the SUG election anticipated mid AUGUST.

It would be recalled that the new academic calendar released months ago doesn’t include the Student’s union election in the scheme of activities. 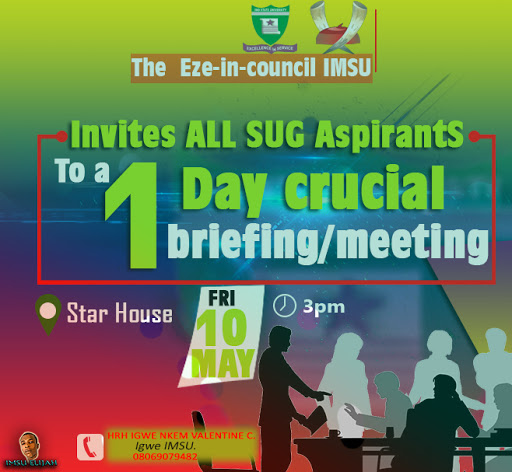 The Eze-in-council forms more than 58% of the voting strength in IMSU as it is certainly the supreme body that oversees traditional institutions in the school.

All concerned persons should take note and be punctual. Further enquiries: 08069079482