Posted by Stanley Onyechere on May 28, 2019
The member-elect for Nkwerre/
Nwangele/Njaba/Isu federal
constituency of Imo State , Ugonna
Ozurigbo, was on Monday sacked by a
Federal High Court in Owerri.
Justice P.A. Rigime, who delivered the
judgment, ordered the Independent
National Electoral Commission to issue
Certificate of Return to Kingsley
Echendu of the Peoples Democratic
Party.
Advertise With Us
Neither PDP, nor its candidate was
party to the suit.
The court said that Harrison Nwadike,
who is the plaintiff, was the “rightful
winner” of the All Progressives Congress
primary election in the federal
constituency.
Nwadike had taken his party, APC, and
INEC to court over the submission of
Ozurigbo’s name as the candidate of
the party.
Nwadike, who prayed the court to
declare him as the APC rightful
candidate, contended that automatic
tickets were unknown to the
constitution.
But the court in its judgment in the
tension soaked court room agreed with
the petitioner that automatic tickets
were unknown to law.
The justice who said that the candidacy
of Ozurigbo was illegitimate ordered
INEC to issue the PDP candidate,
Echendu, who came second in the
general election with the certificate of
Return as the rightful winner of the
election.
The petitioner who spoke with The
Punch after the judgment was
delivered, said that while he agreed
with the court that he was the rightful
winner of the APC primary in the
federal constituency it was wrong for
the court to had declared the PDP
candidate the lawful winner of the
general election.
He vowed to go to court to challenge the
aspect of the judgment which ordered
INEC to issue the PDP candidate the
certificate of return.
But counsel to the PDP candidate who is
the beneficiary of the court judgment,
Stanley Imo, said that the court was
right to had declared his client the
rightful winner of the election.
He said “the law is very clear on this.
Harrison Nwadike did not participate in
all the stages of the election but my
client did. Now that the court held that
Ugonna Ozurigbo was not the rightful
candidate of the APC says that the
second runner up who is my client that
participated in all the stages of the
elections should be issued with the
certificate of return.”
The PDP publicity secretary in the
state, Damian Opara, urged INEC to
waste no time in issuing its candidate
the certificate of return as ordered by
the court.
Opara who spoke to our correspondent
said that the judgment “has shown that
impunity and illegality are bad. PDP
did perfect primary elections and we
are reaping the dividends.”
Ozurigbo had, last Wednesday, resigned
his position as the Deputy Speaker of
the Imo State House of Assembly. 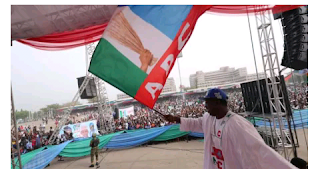