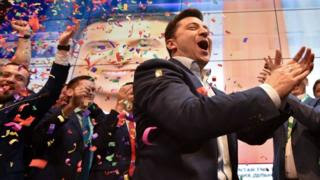 Ukrainian comedian Volodymyr Zelensky has won a run-off election to become the country's next president by a landslide, exit polls suggest.

The polls give him more than 70% support. He dominated the first round of voting three weeks ago when 39 candidates were on the ticket.
Mr Zelensky challenged incumbent president Petro Poroshenko.

Mr Poroshenko has admitted defeat but told supporters gathered in Kiev that he will not leave politics. "I will never let you down," Mr Zelensky told supporters on Sunday.
He added: "While I am not formally president yet, as a citizen of Ukraine I can tell all post-Soviet countries: 'Look at us! Everything is possible!'"

If polls are correct, he will be elected for a five-year term.
Ukraine's president holds significant powers over the security, defence and foreign policy of the country. Mr Zelensky, 41, is best known for starring in a political satirical drama called Servant of the People in which his character accidentally becomes Ukrainian president.
He ran under a political party with the same name as his show.

With no previous political experience, his campaign focused on his difference to the other candidates rather than on any concrete policy ideas.

Despite this, he won the first round with more than 30% of the vote - almost double what Mr Poroshenko got when he finished in second place with 15.95%.
News