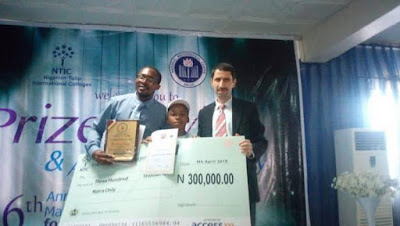 The News Agency of Nigeria reports that Ikenna, who won gold medal, scored 98.85 per cent to defeat 39,518 candidates who participated in the competition in the 36 states of the Federation, including the Federal Capital Territory.


The competition, organised by National Mathematical Centre and Nigeria Tulip International Colleges Abuja, was to reward the hardwork of pupils, who surmounted the phobia associated with mathematics.

Mr Ercan Yilmaz, Principal, NTIC, Ogun State Chapter, said Ikenna would get a full scholarship with a cash prize of N300,000 while his teacher would get N200,000 and his school would get a digital printer and desktop computer.

“This is certainly a display of academic commitment par excellence which NTIC as a school that rewards hard work would not be tired of doing.

“We believe that pupils who could devote much of their time to the mastery of mathematics, that others in their ignorance, consider a big devil should be more than amply rewarded,” he said.