Posted by elitism6 on April 03, 2019
A new song by RnB singer August Alsina has led many fans into the suspicion that Jada Pinkett Smith cheated on Will Smith with him. 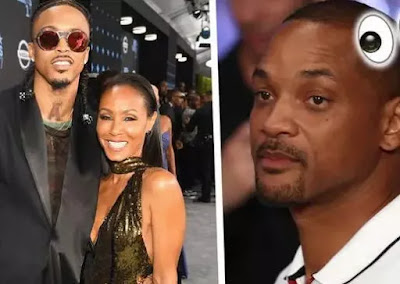 August Alsina released his Forever and a Day EP last month, in which he talks about a past lover who didn’t know what she had until he was gone.

“Putting on a show / ‘Cause you don’t want the world to know / That you lost a man who loved you all along. I gave you time to make me a priority / Put my feelings out there / You ignored it. Ain’t nunya business to know who I’m with” he sings.

Fans immediately linked the song to an alleged affair with Jada Pinkett Smith because the name of the person who the singer was texting in the video is Koren, which coincidentally is Jada’s middle name.
Alsina and Jada became close after he appeared on her show Red Table where he opened up on his drug addiction. Jada also used the opportunity to confess that she was battling sex addiction.
Sharing such deep parts of their past lives together probably bonded them to the point that Alsina had a relationship with the Smith family.
However, since the released his new cover of Kehlani’s “Nunya,” fans are of the opinion that he and Jada had a little more than just normal friendship.