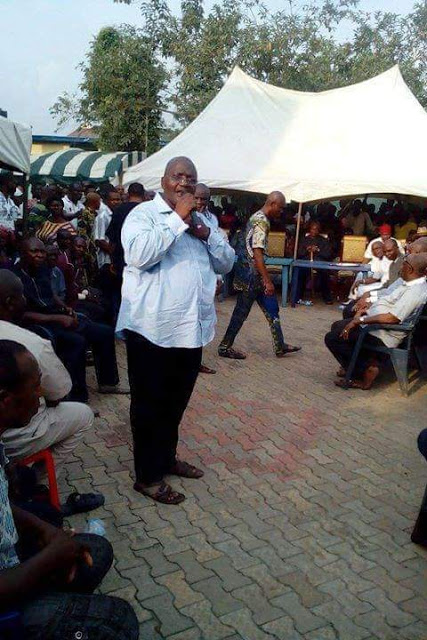 The strong man of the rescue mission and BOT chairman of Ugwumba movement, prince Charles Amadi popularly known as Chavon has abandoned the Ugwumba Uche Nwosu governorship project.
Revealing this development yesterday, the Imo state governor, Rochas Okorocha lamented the betrayal of the Ikeduru born politician who was among the inner caucus of his administration.

He informed his rescue mission supporters that when he called Chavon to verify the rumour of his defection,the response he got from Chavon was that he does not want to fall into opposition because of his business interests.

Going by that response, it means that some top echelon of the rescue mission faction of the Imo APC are doubtful of the chances of Uche Nwosu defeating the gale of roadblocks along his path to the Imo Douglass house.

However, the governor reiterated that Uche Nwosu will emerge victorious eventually considering the fact that the rescue mission faction has more structure now coupled with councilors in every community.
Continuing , he stated that in 2011 he defeated an incumbent without many of the big wigs in the state who were in the PDP. "In 2015, without elected chairmen, councilors, and federal might, I defeated Emeka Ihedioha of the PDP.


How much more now that I have more structures like, commissioners, advisers, elected chairmen, councilors, CGC etc" he queried.

He enjoined his followers not to leave him like some who has left the group assuring them that he will prevail in the end and Uche Nwosu will be the next governor of Imo.