Summary of what transpired between Atiku and Igbo leaders in Enugu 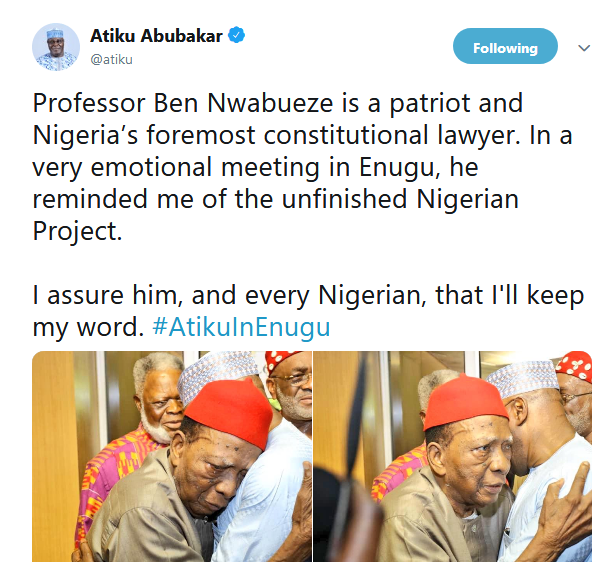 Professor Ben Nwabueze has reportedly said he will not die until Atiku Abubakar who is the presidential candidate of the Peoples Democratic Party (PDP) becomes president of the country.
Nwabueze reportedly said this on Wednesday, November 14 when the former vice president paid him a visit.

Segun Showunmi who is the spokesman of the Atiku Abubakar presidential campaign organisation, shared a picture of both men in an embrace.

Atiku also shared a picture of him and Nwabueze saying he reminded him of the unfinished Nigerian project.
He wrote:

Igbo leaders, including the Ohanaeze Ndigbo and Igbo Leaders of Thought have declared support for Atiku Abubakar and his running mate, Peter Obi for the 2019 presidential election.
Vanguard reports that this was contained in a communiqué read out on behalf of Ndigbo by Chief Olisa Agbakoba. 
What Professor Ben Nwabueze told Atiku at Igbo leaders’ meeting


“Professor Ben Nwabueze is a patriot and Nigeria’s foremost constitutional lawyer. In a very emotional meeting in Enugu, he reminded me of the unfinished Nigerian Project. I assure him, and every Nigerian, that I’ll keep my word.”
