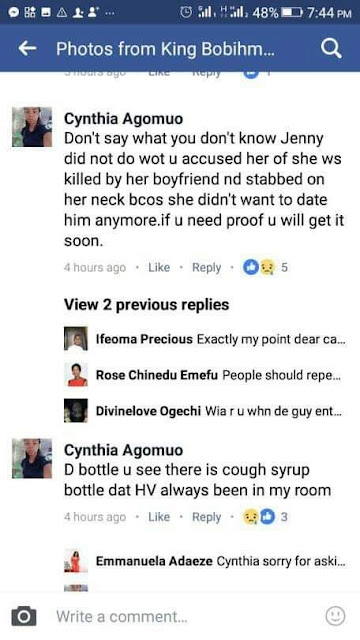 Yesterday, the news went viral that a final year student of Computer Science, Imo State University stabbed her boyfriend and then committed suicide.
The victim, Miss Jennifer Agomuo had allegedly gotten into a fight with her boyfriend who was also an IMSU student, and things went bloody.

If you missed the news, you can see it HERE .
Well, the news reaching elitism6.com.ng  is that the whole story was framed up, and Jennifer was allegedly killed by her boyfriend who probably had to take these measures to cover up the homicide.

According to her, the bottle which people claimed was the poison container was actually a cough syrup and had been in their room for a long time now.

There are always 2 sides to a story which one we go believe now?