Posted by elitism6 on November 19, 2018
Most party leaders from the Southeast and Southwest were worried last night on the tenure framework of Atiku which exceeds four years. 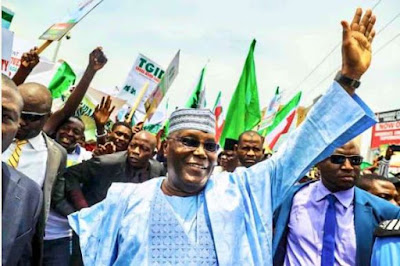 
There was anxiety yesterday in the Peoples Democratic Party (PDP) following the discovery that the policy plan of its presidential candidate, Atiku Abubakar, has extended to a likely second term in office.
Instead of planning for a single term of four years, Atiku’s targets have a six-year timeline, fueling speculations that he might be hoping for two terms in office.
Most party leaders from the Southeast and Southwest were worried last night on the tenure framework in the document tagged People’s Policy”.

According to a PDP governor, who spoke in confidence with The Nation, the “policy is causing some disquiet because it does not give a ray of hope that power will shift from the North to the South in 2023 if Atiku is elected as the nation’s president in 2019.
“Some of us were expecting a timeline of 2019 to 2023 but the policy plan is mostly made up of a six-year plan.
“The people of the South-East, South-West and South-South want a commitment from Atiku on whether or not he will spend one term in office in order to complete the slot of the North.

“We are suspecting that those who drafted the policy have a hidden agenda of two terms in office for Atiku.”
A member of the National Working Committee of the party said: “I think our candidate is planning for the future for the country. It may not be a matter of second term ambition.
“Atiku has not really been categorical on whether or not he will spend one term in office. So, those raising dust on 2025 policy plan are getting agitated to know where he stands.”
The governor took time to highlight some of the contentious areas which have drawn suspicion on Atiku’s plan.
The document said: “The State’s critical policy priority is to build a broad based, dynamic and competitive economy with a GDP of US$900 billion by 2025
“By 2025, we shall increase the inflow of direct foreign investment to a minimum of 2.5% of our GDP Working towards achieving the lowest corporate income tax rate in Africa.
“Accelerate investment to double our infrastructure stock to approximately 50% of GDP by 2025 and 70% by 2030.
“Achieve a sustained increase in manufacturing output from 9% to 30% of GDP by 2025.
“Reduce the sector’s dependence on imported raw materials. Looking inwards will promote value addition.
“Achieve a diversified production structure with more processing of domestic raw materials.”
On electricity, Atiku said: “Power sector reform will be a critical policy priority. By 2025, Nigeria shall make giant strides in diversifying its sources of power and delivering up to 20,000 MW.”
The document indicated that the same 2025 timeline was assigned to crude oil production.
It said: “Prioritise investment in nameplate capacity and ensure that Nigeria starts to refine 50% of its current crude oil output of 2 million bpd by 2025.
“Privatise all four-outstanding government-owned refineries to competent off-takers with mandates to produce agreed levels of refined output.
“Issue new licences for Greenfield investment in crude oil refining and allied activities.
“Introduce market friendly fiscal and pricing policies.”
Concerning road development, the policy document gave also a timeline of 2025.
It added: “Develop 5,000km of roads by 2025 through PPPs and community interventions. Develop and rehabilitate the connecting road networks across the geo-political zones.
“Reduce gradually the rate of unemployment and under-employment to a single digit by 2025.
“Encourage transportation development around the nation’s agricultural and industrial clusters.
“Construct up to 5,000km of modern railways through privatisation, PPPs and public investments.
“Improve existing port efficiency and achieve accelerated development of alternative container ports, especially inland dry ports.”
Speaking with a correspondent last night, one of Atiku’s strategists, Mr. Phrank Shaibu ( who is also a communication expert), said: “2025 is not an eight-year term; it is a six-year plan Whoever takes over will complete the programmes.
“The ruling party’s focus should be more on damage control to enable them offer seeming apologies to millions of Nigerians they have diaappointed and the millions they have put in the labour market through their ill performance in government.
“So, the issue of campaign promises will not hold water for the Buhari camp as their participation in this election is just for posterity to be subtle in judgement of failure.”
On the kind of campaign to expect, Shaibu, who is also a close associate of Atiku, said: “A large population of Nigerians have been taught new lessons on poor leadership and now have a better understanding of disinformation because they feel the reality of economic pains and hopelessness that have been thrust upon them in the past three years.
“Consequently, the campaign for 2019 presidential elections will be based on truth campaign.
“Right now, the electorate have grown in knowledge of what choice will be best for them, especially on their safety, real economic growth and equity.
“Nigerians will experience a new trend of issue based campaign. The two major contestants have been tested and their performance cum capacities to deliver well documented.
“Already, we have a lot of decided voters, especially given their sad experiences and difficulties in the past three years under a president that has ruled Nigeria twice with established antecendent of bringing upon the citizenry abject poverty.
“I believe the campaign focus will be on the few undecided voters. This category of persons when shown and educated on some hidden facts of maladministration, especially on gross embezzlement, many shades of corruption, selective justice and deceits, will reach early conclusions on which camp to give their mandate.”