Posted by elitism6 on August 13, 2018
It has been revealed that members of the National Assembly are yet to be updated on the real situation of things over their plan to reconvene tomorrow. 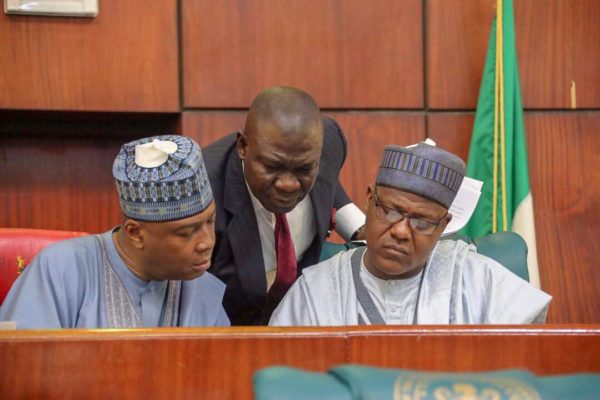 Senate President Bukola Saraki, Deputy Ike Ekweremadu and Speaker Yakubu Dogara
Some National Assembly  members said they are not sure whether  the two chambers will reconvene tomorrow to consider the 2019 budget of the Independent National Electoral Commission.
This is  because the Chairman, Dr. Bukola Saraki, has not made  any official announcement.
The Nation reported today that many senators and House members, who were set to go on summer holiday and perform the Hajj rites, remain in Abuja  because there is no word from the National Assembly’s leadership.
A member of the House from the Northwest said: “This budget is important but there is anxiety everywhere on the security implications of recalling members.

“From the look of things, our leaders are looking at all options on how to make the ratification of the budget easier.”

A principal officer of the House, who spoke in confidence, said: “We have not been told when the National Assembly will reconvene to consider the poll budget. I know the Speaker assured INEC Chairman Mahmud Yakubu last week that we will give the budget a speedy consideration. We are awaiting a recall announcement.

“So far, Tuesday does not look practicable. The basic challenge is the crisis of confidence among members of the two chambers.

“I think the National Assembly leadership is trying to manage the tempers arising from the defections  and the siege to the Assembly complex last week. We are also talking to ourselves to allow reason to prevail.”
House Rule V(18) (1-3) says: “18. (1) Whenever the House shall stand adjourned to a date not fixed and it is represented to the Speaker by the Leaders of the political Parties in the House that the House shall meet on a certain day at a certain time, the Speaker shall give notice accordingly and the House shall meet on the date and at the time stated in the notice.

(2) “Whenever the House stands adjourned either to a date fixed by Resolution or the Rule of the House, and it is represented by the Leaders of the Political Parties in the House to the Speaker that the public interest requires that the House should meet on an earlier or a later date or time than that on which it stands adjourned, the Speaker may give notice accordingly, and the House shall meet on the date and at the time stated in the notice.

(3) “Whenever the Speaker shall have given notice in accordance with either of the two preceding paragraphs, the Clerk shall  communicate the terms of the notice to each member. “
Senate Leader Ahmad Lawan said: “I am still waiting to be informed by the President of the Senate on whether we will sit on Tuesday or not.

“Well, I will expect the Senate President to talk to me or call. I have not received any communication yet.

“And normally, an announcement is supposed to be made. We have not heard of any as I speak with you.”
The Nation said  there were indications at the weekend that if the two chambers reconvene, the Senate may end up merely concurring with the report of the House Committee on the 2019 poll budget for INEC.
The House Committee, chaired by Hon. Aisha Dukku, is said to have concluded the consideration of the budget before the abrupt recess of the National Assembly on July 24.
A member of the committee said: “The House Committee has fine-tuned the budget  in readiness for its consideration at the plenary.

“To save time, the leaders of the two chambers were said to have agreed to adopt the budget ratified by the House.

“Since the Senate is the hotbed of legislative crisis now, the chamber might only sit to concur with the report of the House.

“What the Assembly leadership is planning is to have a brief sitting on the budget. But we are all in suspense on when we will reconvene. We have not been notified of any sitting on Tuesday.”
NASS Saraki