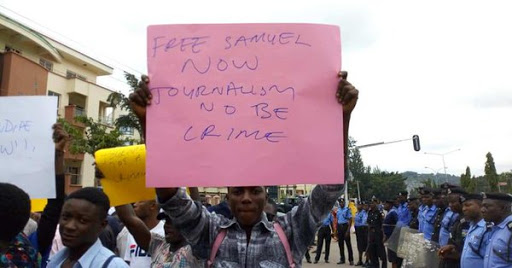 Several protesters on Thursday stormed the police headquarters in Abuja to demand the release of Samuel Ogundipe, a reporter for online medium-Premium Times.

Ogundipe was arrested and detained on Tuesday for refusing to disclose his source for a story.

Unconfirmed report says he was secretly tried by the police on Wednesday and denied access to legal representation at the trial.

The protesters defied stern gun-wielding police officers were however, teargased at the Force Headquarters.

Among the protesters are Deji Adeyanju and Charles Oputa of the #OurMumuDoneDo movement.

The detention of the journalist has been condemned by local and international rights groups including Amnesty International and Committee to Protect Journalists.

Police spokesman, said Ogundipe is not being persecuted, noting that the police have the right to investigate any allegation.

“Even though we have the Freedom of Information Act (FOI), the act itself is restricted to some classified documents and that is what we are investigating, he said.