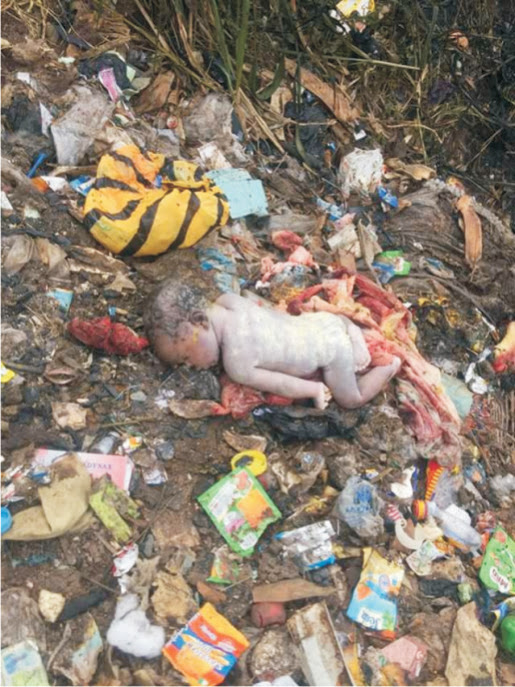 Imo has been in the news lately because  of the political Drama that has engulfed the State away from that the state is in the news again because of an ugly sight that besieged the state residence who discovered the lifeless body of a baby at a refuse dump
The  baby weighing about 5kg was found dead and abandoned yesterday morning, bare and naked by a yet to be identified mother, in a refuse dump along Umezuruike Hospital at First Inland road, Owerri, Imo state.
The incident which drew a crowd of onlookers at the scene, attracted backlash against the mother, who they blamed for giving birth to the baby and leaving him to his fate to die like that, than take him to an orphange home.

A heartbroken social media user,  Agumba Geovanni who took to Facebook to share the video and pictures which has since gone viral said, ” saw this baby in the trash this morning being 2nd August, 2018. Girls Why! Why! Why! Why! God have mercy”.
Further reactions from his Facebook wall, provoked alot of comments and showed the high level of condemnation of the act by his followers and friends on Facebook.
One of such comments from one Omotoyo Faith Coded read, “some ladies are so heartless. Why bring an innocent soul alive, when you can’t take of them? Taking the baby to a motherless home is a better option than this”. Another from Ocheze Cynthia said, ” why will someone carry a baby for 9 months and decide to abandon the baby?, she questioned.
As at the time of filing this report, no move has been made to evacuate the dead body.