Posted by elitism6 on August 27, 2018
A notorious cultist and killer who is an undergraduate of the Federal Polytechnic in Nekede, Imo state has confessed to killing three persons since his initiation. 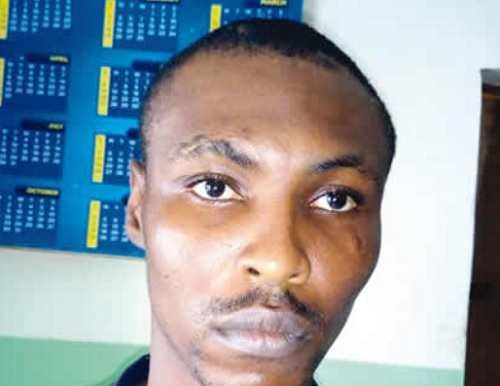 Chijioke Ogbonna
An alleged notorious cultist and killer identified as Chijioke Ogbonna, popularly known as Ogbotiti, has been arrested by officials of the Federal Special Anti-Robbery Squad in Imo State.
According to a report by PUNCH Metro, while being paraded by the police last Saturday, Ogbotiti, told reporters that he had killed three persons since he was initiated into the Black Axe confraternity in 2014.
The 23-year-old undergraduate of the Federal Polytechnic, Nekede, said his resolve to seek revenge led him into killing three persons, one of whom was a member of a rival cult group, adding that his main weapon was a locally-made gun.
While speaking to corresponents, the Police Public Relations Officer in Imo State, Andrew Enwerem, described the suspect as a deadly cultist and armed robber, adding that Ogbotiti was nabbed by F-SARS operatives on August 19 at Ama-Hausa in the Owerri Municipal area of the state capital.
He said the police had been on the trail of the suspect since 2014 for his alleged roles in other criminal activities.
“The suspect, a strong member of Black Axe, confessed to the crimes. He mentioned their gang members, nicknamed as Efizy, Ikalika,Shinshi, Bulldog, Baggy, Sky, now in Owerri Prison and X-money killed in an operation.

“He confessed that they had killed so many people and had been on the run when he learnt he was being hunted by F-SARS operatives.

"Also, last year in Owerri, upon information that he was being trailed by the police, he jumped down from a two-storey building while receiving treatment in a private hospital for multiples bullets injuries,” the police spokesman said,
crime owerri