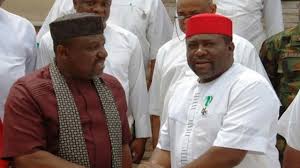 The seeming constitutional crisis trailing the impeachment of Prince Eze Madumere and non swearing in of the new Deputy Governor designate, Callistus Ekenze, has plunged Imo State into a state operating without a number two citizen.
Recall that Madumere was impeached and the desire of the Governor to have the new Deputy, Ekenze sworn in was averted via court orders.
A clearer picture to show that Imo State is operating without a Deputy emerged yesterday when Okorocha at a parley with journalists noted that he is awaiting the vacation of the order before going ahead.

While giving an impression that Madumere is a goner after the impeachment by the members of the House of Assembly following his non recognition before the public that the embattled Deputy is still in office, Okorocha said that the law has to be respected hence the decision to stay action on the swearing in.
According to Trumpeta  the Governor was silent about Madumere and the status of the present Deputy Governor of the State.
About 19 lawmakers after weeks of impeachment process defied the court order to remove Madumere. But attempts to have Ekenze sworn in was stopped because of a court order.
However, Madumere is encountering challenges over gaining back his office and office residence as the police took over the premises baring him assess into them.
Moreover, Madumere as we gathered still believes that he is the number two citizen of Imo State even when Governor Okorocha has rejected him. Okorocha believed he gave Madumere long rope before reacting to his alleged betrayal. It was also revealed that Madumere refused to allow reconciliation moves made by some of the relatives of the governor to settle the matter between him and his boss.

He   persisted that he will remain in APC even when his former Boss (Okorocha) has vowed not to work with him and other die hard coalition members who have continued to oppose the policies of the Rescue Mission government.
The governor challenged the coalition group to bring out their own governorship candidate to contest with Uche Nwosu, adding that they should be talking of their achievement and not to rely on the zoning factor and instances of son in-law as a way to attract sympathy from the public.
“Join another party and contest against APC if you are very popular” Okorocha tells coalition members.

Meanwhile, mixed reactions have continued to trail the removal of Madumere and the attempt to have new Deputy from the same Mbaitoli local government area where Eze Madumere come from.
Mbaise people over the weekend reportedly met secretly and resolved that they will put Okorocha under pressure to give them the position of Prince Eze Madumere.
According to them, “ Mbaike clan has dominated Owerri zone for so long”. They prayed that the Governor should consider it necessary to give Mbaise son or daughter Deputy Governorship based on equity and fairness.
Information from government house revealed that the governor want Mbaitoli Local government Area to serve out its tenure as the LGA that produced the Deputy Governor.