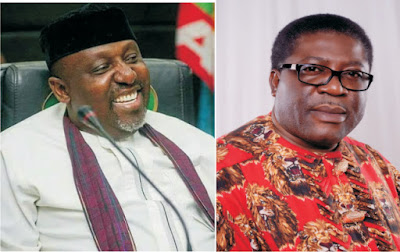 The Dust have not yet settled over the impeachment saga rocking Imo State Government this is because of the difficulty in locating the whereabout of some of the members of the seven man panel constituted to investigate the embattled Deputy Governor of Imo State, Prince Eze Madumere, tongues have began to wag if they personalities really exist.


The question arose from the disappearance act of members of the panel as they could not be reached to be served Court Order from an Owerri High Court.
The Judge handling the matter instituted by Prince Madumere stopping the Imo State House of Assembly from impeaching him, Justice BC Iheaka, had ordered the appearance the members of the panel, but it has not been easy to locate them.
They include Nze Saba Nze, Charles Okoro, Bath N Opara, Mr Chika Anosike, Mr Nwokona Chidozie, Mrs Olivia Nwanekezi and Amadi Chidinma.
In the last sitting, the case could not commence as the Defendants were not in Court, citing non service of motion as the reason.
However, the Judge ordered that the men must appear in Court next sitting as the counsel to the Deputy Governor, Ken Njemanze (SAN) argued that the non appearance of the men was frustrating the case.
However, a source to the office of the Imo State Chief Judge who spoke under strictly anonymity declared that the seven Men-Panel exist with authentic identities and therefore the issue of raising concern should not arise.

Imo independent Newspaper Trumpeta and your favorite blog elitism6.com.ng has followed the case concretely from the beginning and has received much credit from the judiciary for their credibility.

“Upon reading through the motion Exparte for substituted service dated and filed on the 13th day of August 2018, the supporting Affidavit deposed thereto and written address of the counsel.
“And after hearing K.C.O Njemanze(SAN) with N.J.C Chijioke of the counsel to the plaintiff/Applicant.

“It is ordered as follows: Leave is granted to the Applicant as plaintiff in this suit No HOW/565/2018 to effect service of the motion on notice dated 31/7/2018 and filed on 1/8/2018 on the 4th, 5th, 6th, 7th, and 8th defendants in this suit by substituted means, namely: by publication of same in three newspapers including Trumpeta Newspaper with wide circulation in Imo State and Nigeria”, the order read.