Posted by elitism6 on August 01, 2018
The President Muhammadu Buhari administration has moved to boost the relationship between Nigeria and China. 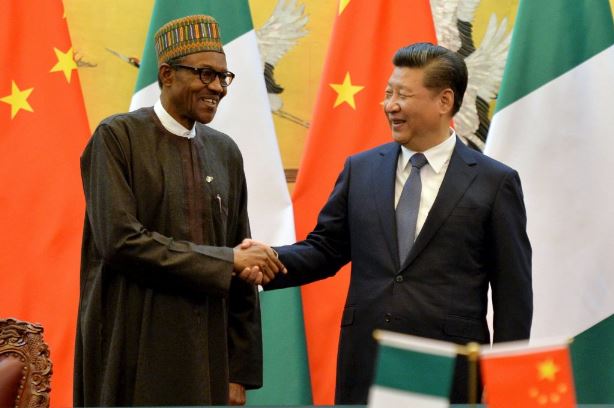 Presidents Muhammadu Buhari and Xi Jinping
China and Nigeria have agreed on strengthening military and security cooperation.
Col. Liu Yongxuan, Defence Attaché of the Chinese Embassy in Nigeria said this at an occasion to mark the 91st anniversary of the founding of the People’s Liberation Army (PLA) in Abuja on Tuesday.
NAN quoted Liu as saying both countries shared similarities in contributing to global peace and security.
“China has always been a builder of world peace, a contributor of world development and an upholder of international order.

“Nigeria has dispatched military personnel to participate in UN peacekeeping operations since its independence and the total number is up to 100,000, one of the largest among African countries.

“This year, Chinese Naval warship for the first time participated in the joint maritime exercises hosted by Nigerian Navy and has given impetus to the call by the Nigerian Government for a combined maritime force in the Gulf of Guinea.

“Under the principle of Mutual Assistance, the military and security partnership and cooperation between our two countries will be further strengthened,” he said.
He also expressed confidence in increased cooperation between both countries in areas of common interest through the promotion of the “One Belt and One Road” initiative.
Chief of Air Staff, Air Marshal Sadique Abubakar commended the efforts of the PLA in promoting world peace and global order.
Abubakar, who was represented by Chief of Aircraft Engineering, Air Vice Marshal Abdulganiyu Olabisi, said that military cooperation between both countries “was growing”.
“One thing I can take away from their development is I see hope for Nigeria and other African countries, looking at the humble beginnings of the People’s Liberation Army.

“There are also examples of your collaboration with other countries across the world and on that note, I want to say that the military bilateral relations between China and Nigeria have been growing especially in the past decade.

“We do appreciate your invaluable contributions to our counterinsurgency operations. We are hopeful that this relationship will be strengthened for the mutual benefit of our countries.”
Buhari China Diaspora