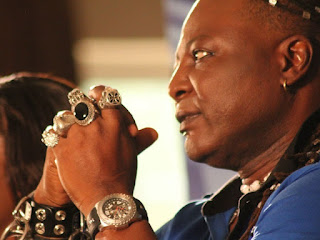 Charly Boy, born Charles Chukwuemeka Oputa has lamented the manner President Muhammadu Buhari-led government has divided Nigeria since inception of the administration three years ago.
Charly Boy spoke in reaction to a video shared by a Nigerian soldier complaining about welfare and state of the nation.
The soldier had posted the video on his social media timeline, complaining over the conditions they are being subjected to in the volatile regions of the country and then advising Nigerians to go get their PVC to vote out old men in government.
According to Charly Boy:
“President Buhari has destroyed this nation beyond imagination in just 3yrs, close to 300 soldiers have been killed in about 5weeks. He is yet to even acknowledge it.
“Many of them have been secretly buried. More are to be buried today.
“The reason he was voted was because he said he could fix the problems.
“Today, he has not only failed to fix the problems, he has created more problems and now blames everyone but himself.
“He inherited insecurity issues in the North East but the matter in that region has gotten worse and he has now exported insecurity to the North West and North Central.
“From Herdsmen killings in Benue, Adamawa, Taraba, Plateau & Kogi to bandit’s killings in Zamfara and Sokoto, the situation is too bad”.
Buhari Charley Boy