Posted by elitism6 on August 12, 2018
An emotional photo currently trending online shows an alleged agent of the PDP shedding tears after his party lost at a council in the Bauchi bye-election. 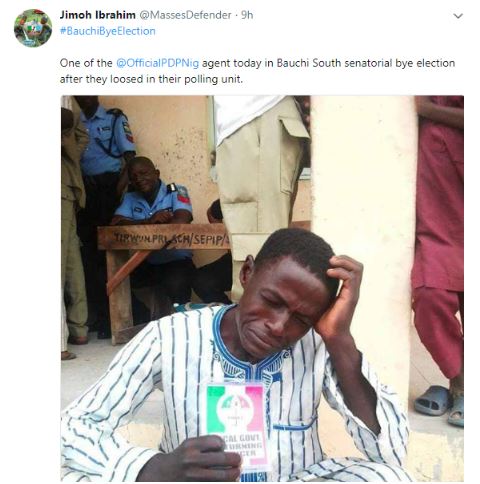 Alleged PDP agent in Bauchi
The Bauchi South Senatorial District bye-election took place yesterday Saturday, August 11th. According to twitter user @MassesDefender, the man pictured above is a PDP agent and was cring after his party lost at his polling unit. See the tweet below.

On Saturday, residents of Bauchi South Senatorial District filed out in their thousands to vote for their preferred candidates in a bye-election organised by the Independent National Electoral Commission (INEC).

The election was held to fill the vacancy created by the death of the last occupant, Ali Wakili.