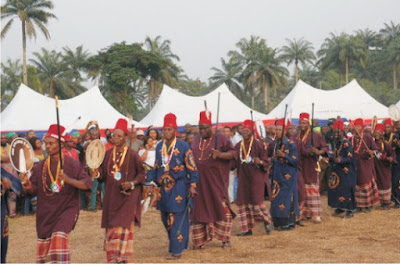 Tension is looming in Mbaise clans following the developments associated with the 2018 Iriji Festival held at Itu Mbaise, even as this blog has gotten a fresh report after the initial news about the location where the Chief of Staff to the Governor, Chief Uche Nwosu was handed the chieftaincy title.
According to   Trumpeta the continued stay of about 78 Mbaise traditional rulers in their domain as royal fathers is in doubt as they have been marked to have opted out from the Chieftaincy installation and not sighted within the premises.

If the number of Eze at the event where Eze Leo Nwokocha, the Chairman of Mbaise Council of Traditional Rulers led others present to confer Nwosu the title is to be counted, then the absentees are in trouble.
It would be recalled that the controversies trailing this year’s Iriji, especially after it was made public that Nwosu would receive a chieftaincy title from the monarchs caused friction, leading the organizers; the Ezuruezu Mbaise, to disagree with the section of the monarchs wanting Nwosu to be handed the title.
Another group of Ndieze, known as the Integrity group objected and were supported by the Ezuruezu groups, both Local and International.
When Government House, Owerri got wind of the details of the possible boycot, a meeting was summoned where Ndueze met with the powers that be in Government House and a riot act was read out to them to either be part of the exercise or be dethronement.
Out of fear,   we were  informed that the few lilly-livered monarchs succumbed and took part while majority kept away. The names of those alleged to have taken part are; O.C Nwokocha, Leo Nwokocha, Jeo Olekah, Waturuocha, G.O Obasi, B. Nwaneche, Onyekachi Obabia, Tony Nwanguma, Mike Nwamara, Thankgod Eleweogu, A.A.Anyanwu, Eze Adiukwu from Eziudo sent a representative and Eze Uwahemo from Onicha.
Should the threat from Government House quarters be considered, then the absentee Ezes are in trouble and likely going to face severe consequences where dethronement may come in.
Contrary to reports that Ugwumba Uche Nwosu received the Chieftaincy title in an Eze's Palace. A more clearer picture of what transpired has appeared.
However, further reports gathered have it that it was at the Central School Itu, venue of the event. Trumpeta  correspondent who was on ground stated that after the performance of traditional rites majority of the Ezes and Ezeji’s left, the venue became alive when Nwosu came with his teeming supporters.
At that point the event turned to a political rally with all the structure of Ugwumba moving round the field with banner and supporters of Uche Nwosu took over the place and allegedly removed every posters of other political aspirants who are not Rescue Mission compliant. Nwosu now took the centre stage as his supporters who are mainly not from Mbaise began to sing and dance in solidarity songs around him.
His arrival to the event place changed the atmosphere as he was atop the jeep acknowledging cheers from his supporters drawn from all parts of Imo State, mainly, from Ohaji/Egbema. Other aspirants in Ugwumba Uche Nwosu’s camp used the opportunity to show case themselves. The place became very rowdy and at a time police calmed the situation and stopped all movements. The police ordered that people should go back to their seats.
Kola nuts were presented to him after which he was presented before the crowd for the chieftaincy title. Eze Leo and others present gave him the title “Ugwumba Oha-Nile and not Omenkeahuruanya as earlier rumoured. Eze Nwokocha while appreciating Nwosu told Uche Nwosu not to forget Ndi Eze Mbaise.
After receiving the title, Uche Nwosu promised to carry Mbaise people along. He also promised to empower youth and women of the area if he becomes governor in 2019. Elitism6 Correspondent who was at the venue when the Ezeji’s and majority of the Ezes left after the Iwaji was told Nwosu’s Chieftaincy title would hold at Eze Nwokocha’s palace.
Some of our Media team proceeded to the palace but was turned down by security operatives at the Palace of Eze Nwokocha.