Posted by Stanley Onyechere on August 10, 2020
The President , Major General Muhammadu Buhari ( retd. ) is currently meeting state governors from the North -East and security chiefs .
The meeting, holding inside the Presidential Villa , Abuja , is part of the efforts to curtail the spate of insecurity in that part of the country .
Vice - President Yemi Osinbajo ; the National Security Adviser , Major General Babagana Monguno ( retd); and the Chief of Staff, Prof. Ibrahim Gambari, are in attendance. 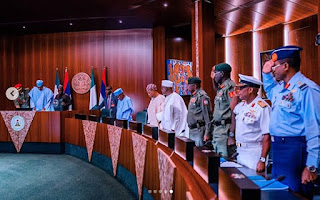