Armed men raped two underaged girls in front of their father and stole 280,000 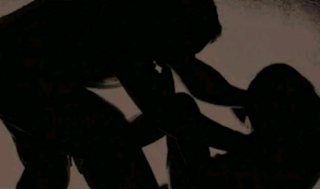 A man was arrested on Wednesday in connection with the alleged rape of two underage girls in Ughelli, headquarters of Ughelli North local government area of Delta State.
The suspect identified as Isaac Friday in the company of three others currently at large were alleged to have also raped the girls in the presence of their father after disposing him of a total of N280, 000.
The incident is coming on the heels of the Tuesday death of a nine-year-old boy who drowned in a borrow pit at Okugbo street area of Otovwodo, Ughelli.
The nine-year-old identified as Destiny Okite Samuel according to sources close to the family had gone to the borrow pit in the company of two of his friends for a swim where he was said to have drowned.

Giving details on the raping of the girls, a vigilante operative in the area who spoke on condition of anonymity, said the hoodlums raped the victims after entertaining themselves with food and alcoholic drinks in the house.
According to the security source, “armed with locally cut to size guns, the boys broke into the house through the window and stole a total of 8 phones from different members of the family.
“They also stole a total of N280,000 from the family and raped the girls aged 14 and 16 years in the presence of their father.
“Not deterred, they also invaded the kitchen of their victims, ate their foods and drank beer in the fridge before fleeing into the night. But one of the girls was able to identify one of the suspects who is a resident of the area.”