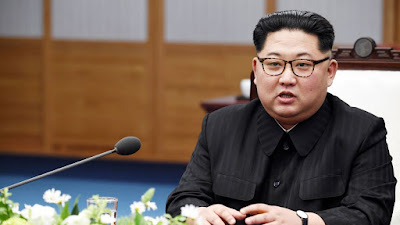 South Korea's government said there were no signs North Korean leader Kim Jong Un was gravely ill after a report he had undergone cardiovascular surgery earlier this month, and was in "grave danger".

Speculation over the state of his health has increased fuelled by his absence from a key anniversary event with the Daily NK, a specialty website run mostly by North Korean defectors, on Tuesday citing unidentified sources inside the isolated state saying Kim was recovering at a villa in the Mount Kumgang resort after undergoing surgery on April 12.

Two government sources told Reuters that reports Kim was in "grave danger" were not true, while the presidential Blue House said there were no unusual signs coming from the north.


North Korea marked the anniversary of the birthday of its founding father and Kim's grandfather, Kim Il Sung, as a national holiday on April 15, but there was no sign of Kim in the pictures shared by the state news agency.

Reporting from inside North Korea is notoriously difficult, especially on matters concerning the country's leadership.

Chad O'Carroll, the chief executive of Korea Risk Group, which produces the respected NK Pro and NK News sounded a note of caution.

"It IS definitely notable that Kim Jong Un was missing all last week given the 04.15 holidays," he wrote on Twitter. "But it should be acknowledged that there are *many* rumors about his health going on at the moment. Some even regurgitate stuff we heard when KJU disappeared in 2014."

He noted that Kim had appeared in public three times in January and February and six times in March. So far in April he has also appeared three times.