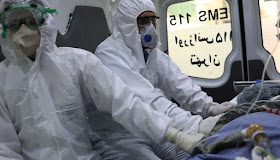 Around 600 people have died and thousands are in hospital in Iran from drinking neat alcohol following a false coronavirus 'cure' claim.

And in a desperate bid to fight the virus, a worrying number of people have drunk high-concentration alcohol with the false belief it will protect them.

It has led to thousands being poisoned.


We previously reported how dozens had died from the false rumour - but a significant number of others have now suffered the same fate.

Iranian judicial spokesman Gholam Hossein Esmaili said: "The numbers are very high and are beyond our expectations.

"Alcohol consumption is not a cure but can be lethal."

Speaking to state-run Tasnim News Agency, he added: "A number of people have been arrested... and we will deal with them decisively.

"They must be held accountable for their criminal acts, for causing death and damage to citizens."