Check Out Football Legends Who Never Played For Native Countries

Posted by elitism6 on November 01, 2019
There are certain football legends who never played for their native countries. These are some of those legends. 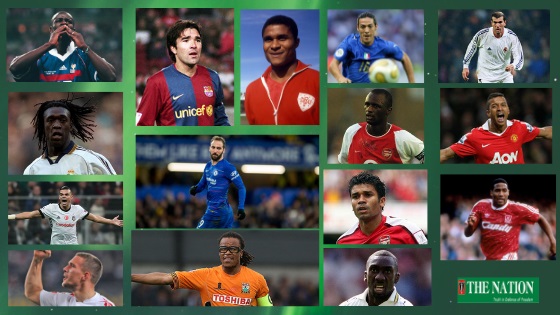 Photo credit: The Nation
The nation a player represents is often the subject of debate. Players with dual-nationality obviously have tricky decisions to make, often regarding which country they feel a closer allegiance to.

In some cases though, players use distant relatives or other such weaker arguments to play for a country which strengthens their chance of winning international honors, and it is these scenarios which are often frowned at.

Some players on this list had very justifiable reasons for playing for countries other than their native ones, while others are a little more questionable.

Here are the top 15 soccer players who didn’t play for their native country:

He is the youngest of five siblings and he is from Kabyle in Algerian. His parents, Smaïl and Malika, immigrated to Paris from the village of Aguemoune in the Berber-speaking region of Kabylie in northern Algeria in 1953 before the start of the Algerian War.

He is one of the most famous French football players of all time, widely regarded as a master of the fundamentals and techniques of the game.

He is known for his excellent control and dribbling skills, his magic ball touch, his focused vision and great leadership traits.

His excellence in football has bestowed him some coveted awards such as the FIFA World Player of the Year thrice, and the Ballon D’Or once.

During his active soccer years, no player would surpass the way he controlled and received the ball. He scored 31 goals, out of his 108 international outings.

The masterful midfield playmaker who won 75 caps for Portugal, proved to be a world class midfielder during his time with Porto, Barcelona and Chelsea.

He was ignored in Brazil, but Deco went to Portugal in 2003 making his debut against Brazil, in which he scored the winner.

France’s 1998 and 2018 World Cup winning squad featured a number of players born outside of mainland France. The former Monaco, Parma, Juventus and Barcelona defender Lilian Thuram is the first French international to feature on this list. He was born in Pointe-a-Pitre, Guadeloupe but made his international debut for France in 1994.
He went on to become a crucial player for the team, scoring twice in the 1998 World Cup semi-final. Thuram had 142 caps for France, making him their all-time most capped player.

Mauro Camoranesi was a wonderful player who could have represented either Argentina at international level. Born in Tandil, Argentina, Camoranesi was eligible to play for Italy through a great-grandfather named Luigi who emigrated to Argentina in 1873.
As such, his ties to Italy were far from immediate, yet when Italy showed an interest in him before Argentina, he chose to tie himself to the Azzurri. He went on to win 55 caps for Italy, winning the World Cup in 2006.

The Holland International who was the former Cameroon national team manager, is considered as one of the most successful players in UEFA Champions League History.

The former Ajax, Sampdoria, Real Madrid, Inter Milan, AC Milan was regarded as one of the most gifted midfielders of his generation.

Seedorf won four Champions League trophies, as well as countless other titles, trophies and accolades. He made his Holland debut in 1994 and went on to win 87 caps for the country, twice being named Dutch Footballer of the Year

Another recurring theme of this list and the last of a collection of 1998 World Cup winners, a titan of the French national team, Patrick Vieira was born in Dakar, Senegal. Vieira moved to France at the age of eight, and his allegiance to the country was never really in doubt.

He made his France debut shortly after joining Arsenal in 1997. He went on to become a star of the French team as their midfield enforcer, winning the World Cup, European Championship’s and Confederation’s Cup as he picked up 107 caps.

The former Benfica Striker is regarded as Portugal’s greatest ever player with only Cristiano Ronaldo in recent times forming his first genuine competition.

Not just Portugal’s but one of the world’s greatest ever talents. During his professional career, he scored 733 goals in 745 matches (41 goals in 64 matches for Portugal) Eusebio won 11 Portuguese titles and one European Cup with Benfica.

Eusebio was born in Mozambique, but made his Portugal debut in 1961, going on to win 64 caps, scoring 41 goals and winning the Golden Boot at the 1966 World Cup.

Another international who was not born in Portugal is former Manchester United winger Nani. The talented but inconsistent wide man was born on the island of Cape Verde.

Nani made his Portugal debut in 2006 and has since won 88 caps for the country.

The former Real Madrid, Napoli, AC Milan, Chelsea and current Juventus striker was born in Brest, France, as his father – also a footballer – was playing in France at the time. Higuain holds a French passport and had to apply for Argentine nationality in 2007 in order to play for the national team. He was successful and to date has 75 caps and 31 goals for Argentina.

Kepler Laveran de Lima Ferreira known as Pepe has become one of the first names on the team sheet in the Portuguese national team, yet he was born in Maceio, Brazil.

Pepe moved to Portugal in 2001, aged 18. Dunga reportedly approached Pepe with regards to playing for Brazil in 2006, which Pepe declined, and he made his Portugal debut in 2007.

The Besiktas defender has over 100 caps for Portugal and was sent off in their 4-0 defeat to Germany at the 2014 World Cup also part of the Russia 2018 Portuguese World Cup Team.

Former Bayern Munich and Arsenal forward Lukas Podolski was born in the Polish city of Gliwice.

Despite this, Podolski’s decision to represent Germany is rather understandable. Eligible to play for both nations, when Podolski first broke through at FC Koln, Polish media asked the country’s manager whether he was in line for a call-up. He replied by saying that his country had “much better players in Poland”.

A year later, Podolski accepted a call-up to the German squad. Today he has 126 caps and 48 goals for Germany, winning the 2014 World Cup and finishing second at Euro 2008.

The former Ajax, Juventus, Barcelona, Tottenham Hotspur midfielder Edgar Davids is one of the best-remembered players of the 1990s due to his distinctive dreadlocks and eye wear.

Davids was also a quality player, who was particularly noted for his combative style, short temper, energy, and technique.

Davids had no choice in the matter as the Surinamese FA do not allow those based outside of the country to represent them, and having joined Ajax at the age of 12, he was allowed to represent the Netherlands, a path a few others have taken, as you will see later in the list.

A Brazilian-born player who doesn’t represent his native country, former Arsenal striker Eduardo was born in the Brazilian capital of Rio, but plays his international football for Croatia.

He moved to Croatia at the age of 16 when he joined Dinamo Zagreb in 1999. Eduardo made his debut Croatia under-21s in 2004, with his chances of international football with Brazil looking unlikely.

He made his full debut a year later, and won 64 caps for Croatia, scoring 29 goals before retiring in 2014 following the World Cup.

Former Chelsea, Atletico Madrid, Middlesbrough striker Floyd Hasselbaink who was born in Suriname. Hasselbaink moved to the Netherlands at the age of 12 and signed his first professional contract with Telstar as a teenager.

Hasselbaink is now one of the brightest prospects in English football management as the head coach at Burton Albion, where he is doing an excellent job.

Liverpool legend John Barnes is considered the greatest Jamaican footballer of all time, yet he never played for the Reggae Boyz at international level. Kingston-born Barnes chose instead to represent his adopted nation of England, the country in which he moved at the age of 12.

Barnes won 79 caps for England, scoring 11 goals and being a part of England’s fourth-placed World Cup team at Italia ’90. He did go on to become part of the Jamaica set-up, managing the country in 2008 and 2009.