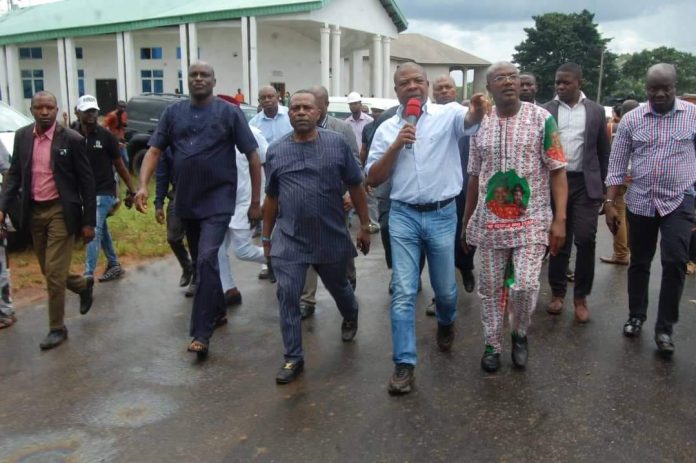 What could be described as a barrage of commendations from a cross section of Imo people, has continued to trail the inspection visits of His Excellency, Chief Emeka Ihedioha, to different Local government areas of Imo State.
Governor Emeka Ihedioha had in his resolve to ensure the execution of standard projects across the State as promised Imo people during his campaigns, embarked on inspection visits to different Local Government areas.
This unprecedented visit has ignited full activities at the rural areas which hitherto, under the 8 years mis-rule of Governor Rochas Okorocha, residents of the LGAs never had cause to savour such visit to the council headquarters. Besides, the staff had nothing doing except for those who wanted certificates of origin. The council headquarters at this time were said to have overgrown by weeds, unkept and moribund with the acclaimed chapel as the only ongoing projects.
At present, from available records, local governments under Governor Emeka Ihedioha, are building roads and other major projects as evidenced in the findings of the ongoing visit of the governor. Some have embarked on the construction of markets, sports arena, small scale industries, etc.
Some of the past local government Chairmen under Okorocha, have said in various fora, that they were given less than thirty million naira only for payment of salaries while their security vote was three hundred thousand naira(#300,000.00).This Revelation is coming on heels of an invitation extended to former local government Chairmen by the LGA judicial panel headed by Barr Eze Duruihioma (SAN).
Meanwhile, according to a source close to the judicial panel, the past council chairmen are to meet the committee on the 1st of November 2019 to explain their roles in the mismanagement of the council funds. This no doubts will further expose the rot in the Local government system under Rochas Okorocha, who as senator, wants the House of Representatives expunged so that there will be no over-sight functions by the legislature over executive excesses.
However, investigation revealed that for the 8 years of Governor Rochas Okorocha’s tenure, the state collected local government Internally Generated Revenue (IGR), which some observers alleged that such funds were shared among the Governor Okorocha’s siblings.
imo state