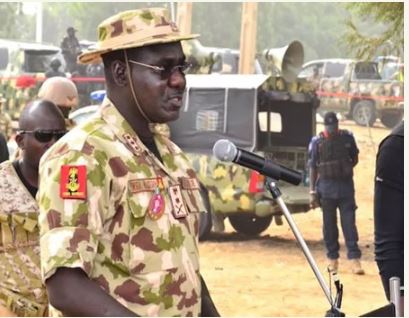 Lt. General Yusuf Buratai
The Chief of Army Staff (COAS), Lt. General Yusuf Buratai, was at the battlefield to provide direction and boost the morale of fighting soldiers as the military launched a grand air and ground offensive against terrorists in Borno State Monday.
The 120 Battalion of the newly formed Nigerian Army Special Forces Command neutralised 100 terrorists in different battlegrounds on day one of the offensive.
The Nigerian Air Force (NAF) is involved in waves of bombardments, destroying in the process several terrorist gun trucks and facilities.
The battlegrounds are concentrated on Goniri, Yobe State, Damasak, Kross Kauwa and Monguno among other locations in Borno State.
“The gallant troops have also been repelling attempted efforts by the terrorists to infiltrate their locations.

“Buoyed by the Chief of Army Staff’s presence and motivation, the troops in the frontline are in renewed positive fighting spirit across the theatre to stop incursions and annihilate the terrorists.