Posted by elitism6 on August 02, 2018
Following the formal defection of Bukola Saraki from the ruling APC to the PDP, the caucus of PDP in the House of Representatives has vowed to resist the impeachment plot against the Senate President. 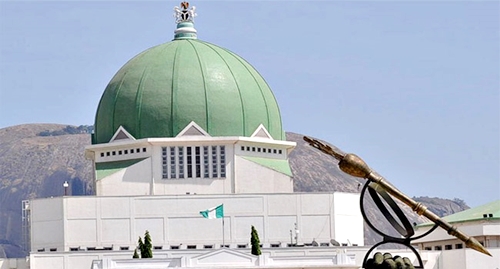 NASS Abuja
According to a report by PREMIUM Times, some members of the Peoples Democratic Party (PDP) caucus of the House of Representatives say they will keep vigil at the National Assembly all night over alleged plot by some All Progressives Congress (APC) senators to invade the senate chamber and remove Senate President Bukola Saraki.
It was gathered that the lawmakers who were led by the acting Minority Leader of the House, Chukwudi Onyema, said they were going to keep vigil to make sure the alleged plans were thwarted.
While speaking to journalists, Onyema said that the PDP caucus had information that three senators, Abdullahi Adamu, Ovie Omo-Agege and Ali Ndume, were planning to forcefully invade the senate chamber while the Senate is on recess.
Both the Senate and the House of Representatives are on recess till September.
Onyema said: “The aim of their invasion of the senate while senators are on recess, to come and sit illegally when everybody is out on recess, is to impeach the senate president.

“We also have it on good authority that they are planning to come back this night and tomorrow morning aided by security forces; our own security forces whose job is to protect the lives of Nigerians.

“They are the ones leading these dissident senators to come and truncate our democracy. We might think they want to take over the senate; that’s not what they want to do.

“They want to truncate this democracy of ours. But we the PDP caucus have decided to stay here to keep vigil and wait to see what’s going to happen tonight and tomorrow night,” the deputy minority leader stated.
He charged Nigerians to stay awake with the caucus because “this is not a rape on the National Assembly, it’s a rape on democracy which concerns all of us.”

“If we allow this to happen, then we can as well go back to when we use to have a military junta. We also have some information that some policemen have arrived. We want to find out what they are doing here”
News