Posted by elitism6 on August 04, 2018
Popular singer, Skales, has opened up about his struggles while climbing up the ladder of significance in the Nigerian music industry. 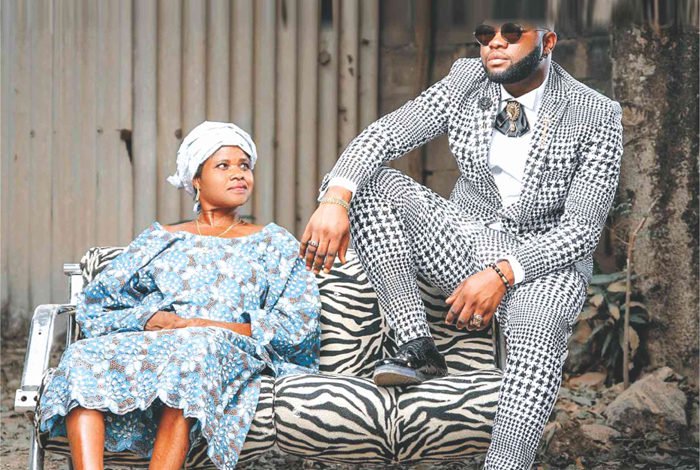 Skales and his mum
Hip hop artiste, Raoul John Njeng-Njeng, popularly known as Skales, in this interview with ADENIYI ADEWOYIN, speaks about how he became homeless after leaving Banky W’s E.M.E records and how Timaya and Olamide delivered him from homelessness and gave
YOU just released your third studio album, can you tell us about the album?
It’s all about love. People who have known me know that what has really kept me going is love and the love that I get from the people, from the media, my fans and people that I don’t even know. So, that’s just why I just  call myself Mr Love. The fact is that I am one of those people that believe in love. I hardy fight. Recently, my brother Wizkid and I just linked up and that is a perfect story.
People did not know we have been talking after what happened five years ago. It is just that we have not made it public. That day, we were so happy about our achievements and how far we have come. We were so excited and the next morning when I woke up I saw Wiz tweeting about me because we had balled a night before.
So, the whole inspiration is just love. Love has kept me going. I bring myself down to everyone. I would not want to blow my trumpet but I help people who come to me for help. The name Mr Love started up with my friends. I don’t know if you have seen the album’s cover. It has my mum’s picture and mine on it. The album is dedicated to my mum, because I don’t know how to explain true love than mothers’ love. She helped me a lot and that was the whole inspiration.
You said the album is dedicated to your mum. Why was she not present at the listening?
She can’t fly for now for health reasons because she lives in Kaduna. My mum has stroke but she is recovering. I can’t do some certain things till she gets better. Of course, I have her full blessings. I just shot a video and she was in the video and the song is the first track on my album called ‘Good Life’ and it’s all about my mum. She’s the vixen in the video.
You are speaking so much about your mum, what about your dad?
I feel like mothers do most of the works and it’s not like the fathers don’t work but you know how it is. Even the fathers appreciate the mums because the mothers make the job easier, because they are always there for the kids. But, at the same time, there are other fathers that also do as much as the mothers. For me, my mum was like the only person that raised me. My parents separated when I was very young.
That’s why I am all about my mum. She basically suffered for my sake to make sure that I have a good life and that’s why I even have the first track named ‘Good Life.’ I am inspired because of my mum. I am motivated because of my her.
What other things are you working on?
People don’t know I have my own music company that I opened before I got signed to Baseline called OK Entertainment. It’s been on a low for a while but we’ve been releasing songs off it. As a matter of fact, Paul Pogba just danced to one of the songs from the label. For now, I won’t say we have many artistes because I am still signed to Baseline that I am very loyal to because they are the reason why I am here right now. They practically helped me be who I am right now. I will be launching my EP maybe months after I drop my third studio album.
How necessary is it for artistes to own a record label?

If you know me well, you will know that I am a businessman. Apart from the music business, I am also an entrepreneur. I do other things I don’t want to discuss in public. It’s not necessary but I feel like a lot of artistes would rather open their record label so that they can be in charge because they don’t want to be controlled. But the good thing for me is that I was lucky to be signed to a record label that gives me the opportunity to do what I want to do as long as it is fruitful and beneficial to the record label.
Baseline is getting all the hype now but you became popular under EME records. What happened at EME?
Of course, everyone knows EME was a big success story. Big shout out to Banky W. He kind of opened everybody’s eyes to know that you can sign teenagers and make them superstars. They signed me at the age of 16 when all I knew was to just make music. During my stay there, Banky also taught us about the music business. He didn’t hide anything from us. He taught us how to make money from music and you can tell by the success of Wizkid and I that we had a very good mentor.
How has life as an entertainer been?
Honestly, I am used to it because I have been signed since I was 16 years old. Everybody knows the Skales’ story has been told over and over again. I have been through a lot of backlashes but it’s all love, most especially from the media. They’ve shown me so much love and support regardless. My main goal is to touch somebody’s life with my story. I came from a very poor home but now look at my life. I can afford to buy a Range Rover, I can afford to buy a car and dash somebody, I can afford to do a lot of thing and sometimes I am still shocked how I got here. I am just 27years old and I have travelled to a lot of countries and have worked with lots of top artistes I never believed I would work with.
Do you believe in the saying that what will be will be?
Yes, trust me it truly works. I would say when I first left E.M.E a lot of people were pitying me and I was wondering why. I believe so much in God as a Christian. So, I believe that whatever happens, happens for a reason. It didn’t even take so long after E.M.E that God gave me a song that turned my life around and that song is evergreen and after ‘Shake Body’ it has been hits back to back. I just want to tell my story so other kids out there won’t give up. Don’t stop, your time will come because everything has its timing.
You once revealed that Olamide paid for your hit single ‘Shake Body’ video…
Yes, after E.M.E I was a broke boy, I was homeless, sleeping from one studio to the other but I had a car. I wasn’t a friend of Olamide but he just liked me since when I was in E.M.E. I never told anybody that I didn’t have anywhere to stay.
One day I went to Timaya’s house and it got late at night. I didn’t have anywhere to go. I was sleeping in the car outside Timaya’s house and the gateman told him “Skales is outside sleeping in the car.” Timaya came and asked me what’s going on? He looked at the back of the car and saw my bags which means practically I was living in a mobile house. Timaya asked me to move into his house and gave me his pent house which was really big. And that was where I recorded ‘Shake Body.’ When I released ‘Shake Body,’ I didn’t have money for promo. I just had one manager (Osagie) that believed in me. The song was everywhere but I didn’t have money to shoot the video and I wasn’t getting shows. People didn’t really know it was me that sang the song.
One day, Olamide found out it was me who sang the song and asked where I was and we spoke at length. He asked what was going on with me and why I hadn’t shot the video and I told him I didn’t have money. He said I should send him my account number which I did and like five minutes later, I got an alert. And that’s how it happened. When I tweeted it, he wasn’t happy with me because he begged me not to ever tell anybody about it. But I wanted to just tell the world how good of a guy he is and big shout out to Davido also. He was always checking up on me. There are lots of people who were checking up on me. The list is endless.
How is your relationship with Wizkid now?
Honestly, it’s all love. We are grownups now and we have a lot of people that are looking up to us and we cannot be messy out there. So, we have to keep winning and help grow this industry. Wiz has done greatly in the industry. That’s why I call him a legend. He is a legend.
entertainment skales