Finally, the Messi-Ronaldo Ballon d’or duopoly is being broken 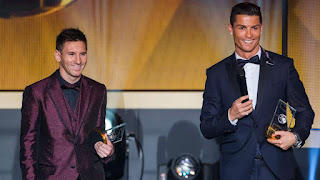 FIFA last week released a 10-man shortlist for the Best Men’s Player, to be awarded at The Best FIFA Awards ceremony slated to take place in London on 24 September 2018. While Ronaldo is the favourite to retain the award for the third consecutive year, with eternal rival Lionel Messi not too far behind, owing to their extra-terrestrial performances over the course of their careers, it is another who most deserves the award.
The world will find out in Zurich on 9 January
Luka Modric has been the standard bearer for midfielders in the last five seasons, and he raised the bar further with a player-of-the-tournament performance to help his country attain a second place finish in the World Cup last month. The 32-year-old has maintained his elite level of performance since his 2012 transfer to Real Madrid from Tottenham, and owing to his performances over the last year, deserves to be named the FIFA Best Men’s Player, for several reasons…
The World Cup is the grandest stage in football, and a spectacular performance at it guarantees a player immortality in the annals of football history. Pele, Franz Beckenbauer, Gerd Muller, Diego Maradona, Paolo Rossi, Lothar Matthaus, Romario, Zinedine Zidane and Ronaldo De Lima are still spoken of mythically till this day owing to their incredible performance at the World Cup. In times gone by, the now-defunct FIFA World Best Player in any World Cup year was awarded to the best player from the World Cup winning team. Lothar Matthaus in 1991, Romario in 1994, Zinedine Zidane in 1998, Ronaldo De Lima in 2002 and Fabio Cannavaro in 2006.
The merging of the awards with the Ballon d’Or in 2009 changed all that, as the awards became a personal contest between the extra-terrestrials that are Ronaldo and Messi and World Cup performance took a backseat in determining the best player in the world. With the separation of the awards in 2016, it is time to respect the sanctity of the World Cup by using it as a yardstick to determine who the best player in the world is, and that player should be Luka Modric.
The former Dinamo Zagreb midfielder rose above corruption trials, a struggling economy back home and a dissenting colleague to win the World over despite their second-place finish, providing inspiration to lift his teammates as they saw off three gruelling extra-time periods in all their knock-out fixtures, to be deservedly named the Golden Ball Winner in Russia. In addition to his World Cup performance, Modric also starred as Real Madrid won the Champions League last season, playing in 14 out of 15 matches as Los Blancos won Europe’s premier club competition for the third consecutive season. It is an advantage which puts Modric in good stead, as none of the other major contenders had both a good season with their club and a strong performance at the World Cup. Individual awards reward a player who was adjudged to have been the best and most consistent footballer over the year in review, and going by his incredible performance for club and country through the last year, Modric should be named the FIFA Best Men’s Player.
The Ronaldo and Messi rivalry is well documented, over the last ten years, they have been engaged in an exclusive battle to determine who the best in the world is, setting more records than some clubs have had players, and winning numerous personal accolades. All individual award ceremonies in the last decade had been turned into a playground for the two, a duopoly where all awards podiums were a matter of Messi, Ronaldo and which mortal would occupy third place (Kaka himself said he was the last human to win the Ballon d’Or in 2007).
It became a question of who between the pair would win the awards, and so the Ballon d’Or lost its appeal, as it was already a fore-given that one of Messi or Ronaldo would win it even before a ball was kicked in anger to begin the season. However, after ten years, it has become a bit boring, the debate about who is the better between the two has only increased with each passing year, with almost equal number of supporters on each side. It is time for fans and the game of football to accept Messi and Ronaldo together as the best of their generation and among the greatest of all time, because trying to decide the better of the pair is an exercise in futility.
Winning exactly 5 best individual player awards each, and would lend more credence to the fact that neither was the superior player. This would be a fitting end to their story. After so many years of grabbing all the headlines and awards, it is time for a new face to be crowned, and Modric has been one of the best of the rests during Messi and Ronaldo’s dominance, so it is only apt that he be the player to usher in the new era.