#Chelsea : Willian Reveals Where He Will Stay Next Season

Posted by elitism6 on August 06, 2018
Chelsea's Brazilian forward, Willian has finally revealed where he will be the coming season as he dismissed claims he wants to leave the FA Cup champions, Chelsea. 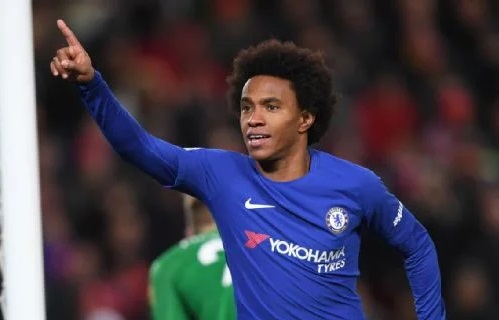 Chelsea's Willian
Chelsea star, Willian has reiterated he is happy at Stamford Bridge, despite a summer of speculation about his future.
The Blues winger has been linked with moves to Real Madrid and Manchester United this offseason but appears intent on playing a big role in new manager, Maurizio Sarri’s plans.
After only minor training following his World Cup exertions for Brazil, Willian came on as a substitute in Chelsea’s 2-0 Community Shield defeat to Manchester City.
And following the Wembley clash, he insisted his future remained in west London as he targets more trophy glory.
“I’m happy here,” he told Chelsea TV. “I’m happy to play here at Chelsea so I’m looking forward to playing well and win titles."
Willian added that the arrival of Sarri has motivated him further as he returns to domestic action.
“When you arrived under a new manager you have more motivation,” he said.
“After holidays you are fresh mentally and you try to do everything that is possible to win games and win titles. We go for it this season.”
Chelsea Sports