Another Body Of Drowned Corper Recovered As Survivor Narrates What Happened

Posted by elitism6 on August 08, 2018
A survivor has revealed details of how nine out of twenty three corpers who went for a picnic drowned. 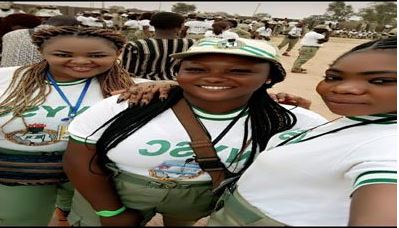 Late corpers who drowned at a river
A team of policemen, soldiers, officials of the National Youth Service Corps (NYSC) and locals yesterday recovered another body of the nine corps member who drowned in River Mayo-Selbe, near the Gashaka falls in Gashaka Local Government Area of Taraba State, according to The Nation.
NYSC State Coordinator Mrs. Florence Yaakugh and some relatives of the deceased moved to the area of accident.
Nine out of the 23 corps members, who went for a picnic on Saturday drowned. Seven bodies were recovered the following day.
The deceased were identified as Mimidoo, from Benue State, whose surname name was not given; Miss Miracle Solomon, about 25, from Edo State, but based in Kaduna, where she schooled at the Queen Amina College. She graduated from Zenith University College, Accra, Ghana.
The deceased is in Batch A and ought to pass out in March.
Her friend, Mr. Olumide Oluwatosin narrating what happened, said: “Initially, I didn’t know she was serving here. On Sunday I received a call from a friend asking whether I know Miracle. I said yes, I know her very well, but the last time I met with her was in Ghana.

“I now demanded for her phone number from the caller, only to be told that she was dead. From there I called a couple of friends and they confirmed the news. “They said she and her friends went for a picnic and she didn’t return.”
One of the survivors, a male corps member, (name withheld), narrated the tragedy to his relative via WhatsApp. He wrote: “We went for picnic, 23 of us. We went to a waterfall. That was the first place.

“After taking pictures, we went to another side where there are beautiful rocks with clean water flowing under them. The water was very low though. After taking pictures there, eating and drinking, we were about leaving when someone just shouted seeoooh.

“When we turned, we saw very dirty water coming with so much force and speed, the kind of speed I have never seen in my life, coming from a distance of about 100 metres. We were almost leaving the place but within seconds, the water got to our position. I don’t know how I jumped out.”
But Police spokesman David Misal said he had not received information on the recovery.
News Nysc