Over hundreds of open market traders among-st students engaged in the ongoing IMSU Post-Utme Commercial Registration were yesterday Tuesday, July 24 displaced when officials of Imo state government house arrived on the instance of the state government at the popular Miami market at IMSU Junction and Extension in owerri municipal council of Imo state demanding traders to concede the area.

The officials all decked in uniform, supervised the exercise at the various locations ensuring that none of the traders re-instates their business kiosks.
According to one of the officials who addressed the inquisitive traders, it was clear that they were acting on instructions given to them. We further investigated that a prior notice were issued to the traders asking the relocate to the campus Mini market at the school back gate.

Reacting on the issue, one Mr. Kingsley who is a trader at IMSU Extension gate said that the demolition notice issued was very short for them to look for another location to continue their business as there are no available spaces at the campus Miami market. 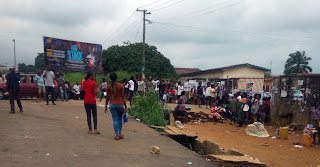