Posted by elitism6 on July 28, 2018
Members of the ruling All Progressives Congress have continued in their attacks against a former governor of Kwara State, Bukola Saraki. 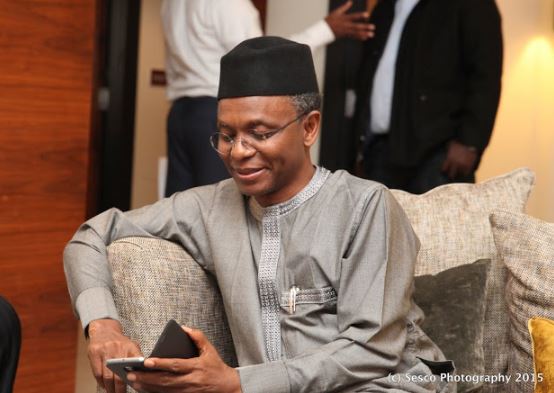 Nasir el-Rufai
The Kaduna State Governor, Nasir el-Rufai, has described the 8th Senate, led by Bukola Saraki, as the worst in the history of the country.
The governor said this in an interview aired on several local radio stations in Kaduna on Thursday, an online newspaper, TheCable, reported.
In the interview, el-Rufai knocked Saraki for listing some members of the ruling All Progressives Congress among those who defected to the Peoples Democratic Party on Tuesday.
He said many of the lawmakers who defected rode on the back of President Muhammadu Buhari to get elected to their positions.
The governor said, “We have never had a bad senate leadership like this one by Bukola Saraki. Some people whose names were mentioned among those who defected said they never authorised it.

“We know those who cannot win elections in their homes. Many of them found themselves in the National Assembly by riding on the back of Buhari.

“Some of them won the elections because the presidential and parliamentary elections held on the same day.”
Responding, Saraki described el-Rufai as a careless talker, saying he as the Senate President couldn’t have announced the name of any defector if they didn’t sign the letter communicating their defection to the PDP.
Speaking through his Special Adviser on Media and Publicity, Mr. Yusuph Olaniyonu, the Senate President said, “El-Rufai is a known careless talker. He is a man suffering from diarrhoea of the mouth. You (one of our correspondents) report the National Assembly on a daily basis. Is it possible for the name of a senator to be announced as having defected without him or her signing the letter communicating same to the Senate President?”

“We challenge el-Rufai to mention the name of any senator whose name was announced without his or her consent. He (el-Rufai) is a divisive element, an expert hero worshipper and noisemaker.”

“He worshipped (former President Olusegun) Obasanjo once the way he is now worshipping (President Muhammadu) Buhari, and now he is on the forefront of abusing the former President. It will soon be the turn of Buhari to be rubbished by el-Rufai. He did the same to ex-Vice President Atiku (Abubakar).”
News