Meet Veronica, The Little Schoolgirl Who Has Two Arms Growing In Her Stomach (Photos)

A schoolgirl is set to undergo surgery after living with two extra arms and half-formed fingers from her parasitic twin dangling from her stomach. 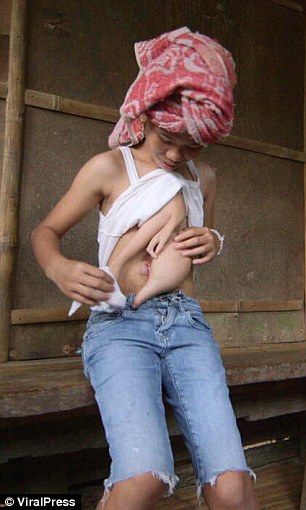 Veronica Cominguez was born with two limbs and an oblong-shaped growth on her torso
A 14-year-old schoolgirl identified as Veronica Cominguez, who lives in Iligan City in the Philippines, and was born with two limbs and an oblong-shaped growth on her chest and stomach, is finally getting surgery to remove the two extra arms and half-formed fingers from the parasitic twin dangling from her torso.
According to a shocking report by Dailymail UK, the girl's extra parts are belonging to a parasitic twin who did not develop properly. Veronica is now set to live a normal life after locals raised money for her to fly to neighbouring Thailand for an operation.
While speaking to a correspondent, she said; 'When I was little, I thought it was just a foot. But as I grew up, it became bigger. It keeps swinging. My dress often gets wet.' 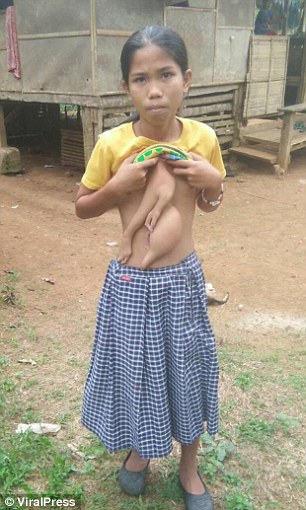 Veronica's mother, Flora Cominguez said their family has a history of twins. Although she was not able to properly see a doctor during her pregnancy, she knew she was expecting twins and had even picked out name for both.
But unfortunately, Veronica's sibling did not fully develop and she has been forced to grow up with a parasitic twin.
Flora said Veronica's navel always gets wet because of the liquid that comes out of it and sometimes, the discharge has blood on it. 'The liquid that comes out of the opening smells bad, like human excretion,' she said. 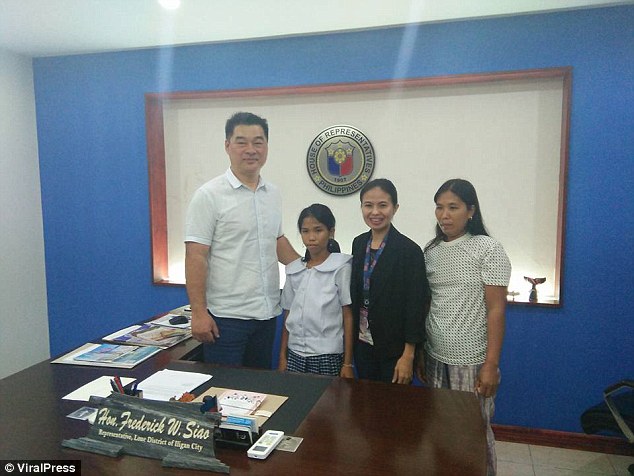 Veronica pictured with her teacher Analyn Bancat Quilab (second from right) who helped organise the procedure
Meanwhile, according to Veronica's doctor, the extra limbs can be removed through a simple operation.
Dr. Beda Espineda, a pediatric surgeon at the Philippine Children's Medical Center, said: 'Most of these cases can be removed because, usually, the body structures involved are not vital. Most of them are just attached to the skin or bones. For surgeons, it is easy to remove.'
Now, Veronica is now waiting to have the surgery. The local government office in her village, which has her under its welfare care system, said she is due to fly to Thailand in the coming weeks.
Diaspora Thailand