Posted by elitism6 on July 27, 2018
The alleged plan by the Senate President and the Governor of Kwara state to decamp to the PDP has been rejected by the state party chairman. 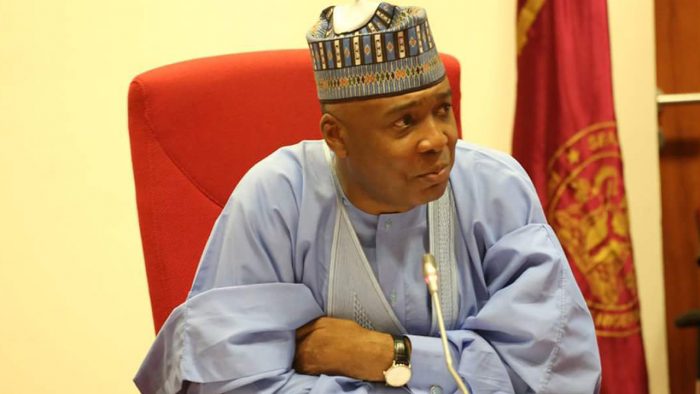 Senate President Bukola Saraki
Huge drama is expected in Kwara state politics in the weeks ahead as Senate President Bukola Saraki and Governor AbdulFattah Ahmed formally declare their defection to the Peoples Democratic Party from the All Progressives Congress, according to a report by The Nation.
It is believed that what happened in 2014, when APC members left to join the PDP after Saraki joined the APC, a counter-defection from the PDP to APC or another political group is now easily predictable.
A sign of what to expect is the declaration by the Kwara State chairman of the Peoples Democratic Party (PDP), Akogun Iyiola Oyedepo, that he cannot work with the incoming defectors, especially Saraki and Governor Abdulfattah Ahmed.
Two senators, Shaaba Lafiagi (Kwara North) and Rafiu Ibrahim (Kwara South) as well as the six members of the House of Representatives from the state were among federal legislators who defected on Tuesday from the APC.
But Oyedepo, who spoke on the development on a radio programme in Ilorin, the state capital, said the national leadership of the PDP set up a committee to interface between his group and the defectors. The first meeting is slated for next week, he said.
The PDP chairman, who said he had just returned from a meeting with PDP leaders in Abuja, blamed the party’s national leadership for being allegedly insensitive to the political configuration in Kwara State and allowing themselves to be swayed by funding capacity of the defectors. To him, the option now before the leaders is to choose between his group and the Saraki’s.
If we agree to work with them (Saraki), just imagine myself and (Governor AbdulFattah Ahmed) Maigida standing on the same rostrum, pledging to do things for the people. It will be a shame; many people will look at me and wonder what has happened. So, it is better not to be in politics again. Instead of a dog being the treasurer for the lion, it is better for both to part ways and go on their separate hunting game.
“We have not sat down with the Senate President, Dr. Bukola Saraki and the state governor, Alhaji AbdulFattah Ahmed, even though I’m hearing several rumours that I have met with them and that they have offered me juicy positions. Those are all lies; the Senate President despite his humongous wealth, does not yet have what it takes to buy me. He cannot ever buy me because he cannot buy my integrity. If my bank account is not fat, my integrity account is very fat.

“So, we will tell our national body to choose between us and them and I know that they will not choose us because we don’t have money but we are not worried. We will only know that an end has come to our journey and our relationship (in the PDP).

“If we agree to work with them (Saraki), just imagine myself and (Governor AbdulFattah Ahmed) Maigida standing on the same rostrum, pledging to do things for the people. It will be a shame; many people will look at me and wonder what has happened. So, it is better not to be in politics again. Instead of a dog being the treasurer for the lion, it is better for both to part ways and go on their separate hunting game.

“The blame is not from the Saraki camp; the blame is from our national leaders (in the PDP). Leadership in Nigeria is the conspiracy of the elite to punish the downtrodden. When they gave us the party, we inherited nothing and so whatever you see in the PDP today is the product of our efforts. For this alone we should not be interested in defecting from our own house but it is better we do so now and look forward to better future for our dear state.”
Oyedepo is author of the book: Shonga and the Looting of Kwara State Treasury. He also wrote Letters to the Emir. Shonga offers an  incisive and revelatory account of how Senator Bukola Saraki, a former governor of Kwara State,  in collaboration with the rejected white Zimbabwe farmers ruined a thriving farming culture and thus manoeuvred the state into a debt trap.